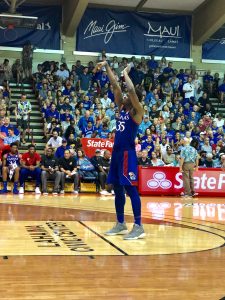 Kansas senior Udoka Azubuike follows through with his form on a practice free throw during Tuesday's 71-56 win over BYU at the Maui Invitational.

Lahaina, Hawaii — Late in the first half of Tuesday’s Maui Invitational semifinal victory by fourth-ranked Kansas over BYU, Jayhawks fans were treated to something so many of them have been clamoring for for years.

During a timeout, with the Jayhawks leading the Cougars en route to a 29-27 halftime edge and 71-56 victory, KU fan Andrew Sigler was called onto the floor to represent the Jayhawks in a free throw contest against a BYU fan on the other end.

As soon as the DJ calling the contest finished his, “On your marks, get set, go,” routine, Sigler grabbed the first ball and fired it toward the rim granny style.

“I haven’t shot a basketball in a year or two,” Sigler explained. “So I just figured that might be my best chance of actually making a shot. Plus, I kind of wanted to show Dok what it looked like in case he wanted to try it.”

Dok, of course, is KU big man Udoka Azubuike, and the granny style shot is one of a dozen different suggestions Kansas fans have offered up during his Kansas career all with the idea of helping the career 39% free throw shooter cure his shooting woes.

Instead of watching Sigler’s form, which led to the victory with five makes — he got a key chain, some chapstick and “bragging rights” for his efforts — Azubuike no doubt was locked into the timeout huddle on the Kansas bench.

But that did not make things any easier for Sigler, whose father, Jeff, owns Sigler Pharmacy in Lawrence.

“It’s just been so long and I was afraid I was going to embarrass myself so I figured the granny shot was the way to go,” he said. “I was nervous to start off with, but after the first couple I got really nervous and then I kind of calmed down a little bit.”

Asked if he hesitated to say yes when they asked him if he wanted to shoot, Sigler was honest.

“A little bit,” he said. “But my sister and mom talked me into it. This is such a great event. It’s a beautiful location, everyone’s been so nice and the whole island is kind of indescribable.”

As for Azubuike on Tuesday, he finished with a double-double of 11 points and 10 rebounds to help pace the Kansas victory, but was just 1-of-5 at the free throw line.