BYU Cougars jacked for opportunity to take on No. 4 Kansas in Maui semis 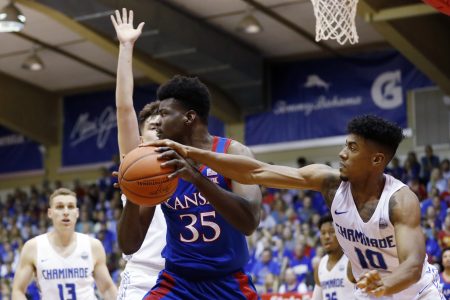 Lahaina, Hawaii — At the time he spoke with the media following No. 4 Kansas’ 93-63 victory over Chaminade in Round 1 of the Maui Invitational, KU coach Bill Self was not sure who his semifinal opponent would be.

That wasn’t an issue for BYU coach Mark Pope and Cougars Jake Toolson and TJ Haws following their 78-63 win over UCLA that earned them a chance at Kansas at 9:30 p.m. tonight in the tourney’s second semifinal.

Because of that knowledge, it was crystal clear mere minutes after securing the Round 1 win on Monday night that all three were looking forward to the challenge.

“Well, listen, Kansas is a great program,” Pope said. “They have a great coach and a great coaching staff. So that’s why you come to this tournament. Like, if we didn’t want a chance at Kansas we would have gone to some mid-major tournament somewhere. But this is where we want to be and we are learning things about ourselves every day. And this team, we’re not backing our way into this season.”

It was not just what the fourth-ranked Jayhawks represent from a big-picture perspective that Pope was geeked about on Monday night. He also was well aware of exactly what taking on that challenge would mean.

While that assessment sounded a little more daunting and realistic than rah-rah, neither Toolson nor Haws could wipe the smiles off of their faces when talking about the matchup.

Toolson, the crafty senior who scored 20 points on 8-of-14 shooting against the Bruins, was more excited about what playing Kansas meant than just playing Kansas.

“I mean, I just want to keep doing this,” he said. “It was a great feeling out there tonight. This is one of the best tournaments out there, if not the best. So we’ve got another challenge ahead of us tomorrow but all of us are really excited about it and we’re going to have another chance at it tomorrow.”

KU leads the all-time series with BYU 3-1, but the two programs have not faced each other since the Jayhawks beat BYU, 90-76, in an NCAA Tournament second-round Midwest Regional game in Chicago in 1993.