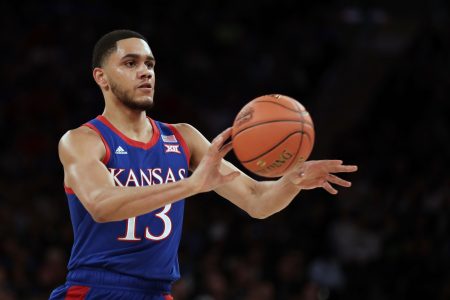 Kansas guard Tristan Enaruna (13) passes against the Duke during the first half of an NCAA college basketball game Tuesday, Nov. 5, 2019, in New York. (AP Photo/Adam Hunger)

He played 16 minutes in his college debut, followed it up with another strong showing in Game 2 and soon may be in line for even more playing time.

Freshman wing Tristan Enaruna wasn’t perfect on Tuesday night in KU’s 68-66 loss to Duke at Madison Square Garden in New York City or during the Jayhawks’ 74-62 win in the home opener at Allen Fieldhouse on Friday, but he provided enough of a glimpse of his skill set to suggest that using him more in the weeks ahead might be.

Although Christian Braun was the first freshman off the bench for the Jayhawks against Duke, Enaruna played more than four times as many minutes as either of his freshmen teammates in both KU games.

Enaruna followed up a 5-point, two-rebound, two-block showing against Duke with a line of 9 points, five rebounds and two assists in 20 minutes in the win over UNC Greensboro and had a significant impact on both games.

Despite the 12-point win at home, KU coach Bill Self said Enaruna hit “the biggest shot of the game,” against the Spartans, a 3-pointer from the top of the key that halted a late rally by UNCG and locked up the Kansas victory.

The shot was not unlike the 3-pointer he hit against Duke, with Enaruna calmly coming around a ball screen and hitting a rhythm jumper like he had done it 100 times before.

“He’s a talented kid that’ll just get better with time,” Self said. “He just needs to keep getting stronger and being a little bit more aggressive and I think that his minutes will go way up.”

That last part is the trick. For the past couple of weeks, Self has talked about wanting to see Enaruna come out of his shell a little more and assert himself with the kind of energy and intensity that matches his talent.

“Tristan, to me, maybe has the most upside of all of (the current KU freshmen) because he’s so long,” Self said on a recent episode of “Hawk Talk.” “He’s 6-foot-8 and his wingspan is 7-2 or 7-3 and he can really slide and move. His shot is streaky, but he is so casual acting. He’s so smooth and plays so cool that sometimes it drives you nuts because you want him to play harder. The reality is he is playing hard, that’s just kind of his personality.”

Self compared him to former KU great Archie Marshall, who played for Larry Brown in the mid-to-late 1980s.

“Archie Marshall was that way,” Self said. “Archie was so smooth. And I remember coach Brown going, ‘Come on, Arch, God, come onnnnn.’ That’s what I want to do with Tristan.”

Asked about his “casual” demeanor on Thursday afternoon, Enaruna smiled as if to indicate that he, too, had heard plenty from Self about his laid-back vibe.

“I think it’s kind of just the way I am, which sometimes makes it look like I don’t try hard,” Enaruna said. “But I think it’s just something that has been with me all this time.”

Asked after the UNCG victory how he could turn up the intensity to please his head coach, Enaruna matter-of-factly laid out the game plan.

“I think it’s just a switch that you have to turn on,” he said. “Once you’ve done that it’s just all automatic, diving after balls, going to the glass, all that.”

Enaruna flashed some aggressiveness against both Duke and UNC Greensboro. But it appeared to disappear as quickly as it arrived.

However, neither game — nor either stage — ever seemed too big for him. Part of that is his cool, calm and collected nature, and part of that is Enaruna’s comfort level and confidence in most situations.

“It’s very hard to tell with Tristan just because seems poised all the time,” McCormack said. “He’s a very casual player. But Tristan played really well. I was proud of him. He played to his size, his length, defensively and offensively.”

KU point guard Devon Dotson agreed after the UNCG victory and said a lot of what Enaruna has shown so far is what he and his teammates have seen from the 6-8 freshman from the Netherlands in practice dating back to early summer.

“His length (brings) activity on the defensive end, he gets his hands on loose balls, knocks down shots and keeps possessions alive,” Dotson said. “I’m not surprised.”