Late Night in the Phog set for Oct. 4 at Allen Fieldhouse 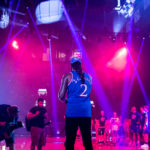 The teams and media watch as 2 Chainz performs at Late Night in the Phog on Friday, Sept. 28, 2018 at Allen Fieldhouse.

The Kansas men’s basketball program on Thursday afternoon announced Friday, Oct. 4 as the date for this year’s Late Night in the Phog at Allen Fieldhouse.

This year’s event will be the 35th annual Late Night extravaganza that annually kicks off another season of Kansas basketball.

As usual, Late Night in the Phog will feature music by the KU pep band, routines from KU’s spirit squad and dance teams, skits by both basketball teams, videos from KU’s award-winning Rock Chalk Video department, coach and student-athlete introductions, scrimmages by the KU women’s and men’s teams and much more.

During the past three years, Late Night also has included a performance by a well-known rap/hip hop artist, with Tech N9ne performing in 2016, Lil Yachty in 2017 and 2 Chainz rocking Allen Fieldhouse a year ago.

There has been no announcement about an encore performance for 2019, but one would have to expect that the new tradition of turning a portion of Late Night into a concert catered to college students and recruits would continue this year.

KU officials said more details about the format of this year’s Late Night will be made public when the event gets closer.

This year will mark the first time in KU history that two Late Nights took place in the same year, with Les Miles’ football program hosting “Late Night Under The Lights” to wrap up spring football back in April.

The Late Night moniker, though used only for basketball during the past 34 years, has now become a full-fledged brand within Kansas Athletics, even though Late Night in the Phog remains the best-known event associated with the name.