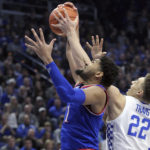 Kansas' Dedric Lawson, left, and Kentucky's Reid Travis (22) compete for a rebound during the first half of an NCAA college basketball game in Lexington, Ky., Saturday, Jan. 26, 2019.

But it did not take him long to catch on with a team.

Just minutes after the draft wrapped around 11:30 p.m. Thursday night, a report from Yahoo! Sports indicated that Lawson had agreed to a summer league deal with the Golden State Warriors.

“He told me that was a possibility,” said KU coach Bill Self late Thursday night shortly after talking with Lawson following the draft. “Golden State was a team that liked him and obviously if he’s going to try to get involved with a group, that’s a pretty good group to get involved with. …There’s no question that he can help a good team be better because he knows how to play with good players.”

The Warriors, who had their bid for a 3-peat squashed by Toronto in this year’s NBA Finals, had a handful of picks in this year’s draft and selected Michigan’s Jordan Poole at the end of the first round, as well as Serbian center Allen Smailagic and Villanova big man Eric Paschall in Round 2.

Self said he believed Lawson had as good a chance as any of the Warriors’ picks to make the roster because of the depth of this year’s draft.

“I knew that several NBA teams were interested in him,” Self said. “And (with) this year’s draft, if you really study it, there wasn’t that much separation between (picks) 30 and 70.”

Self also believes in Lawson’s ability.

“The thing that’s so attractive to NBA teams and to people about Dedric is that knows how to play, without question,” Self said on a post-draft conference call. “He’s a darn good player. “But the thing that wasn’t going to be changed, certainly overnight, is the fact that he’s not as explosive as some of those other guys are. It’s kind of pick your poison with Dedric. You can get an unbelievable basketball player, probably with as high an IQ as anybody in the draft, but you probably don’t get the explosiveness that some of those other guys possess and that potential tag is probably stuck to them more than Dedric.”

Lawson, who earned third team All-America honors after averaging 19.4 points and 10.3 rebounds per game for the Jayhawks during the 2018-19 season, watched the draft with friends and family in his hometown.

Self said he spoke with Lawson shortly after the final pick was made and said he seemed “OK.”

“I don’t know if disappointed’s the right word,” Self said of his own feelings about Lawson going undrafted. “But I certainly feel bad for Dedric because that’s obviously a goal of his, to have his name called, and it didn’t happen. But he can still do exactly what he wants to do, he’s just got to do it the hard way, which will make him much better in the end.”

With neither Lawson nor Lagerald Vick getting drafted on Thursday night, KU’s streak of 10 consecutive years with at least one player landing in the two-round NBA Draft is now over.

“I’m happy when guys get drafted, but I could care less about that, the streak,” Self said. “It’s certainly nice, but we had one guy that was draftable and he had a great year for us and gave us everything he had and those sorts of things. It’s just something that happens. And if I were a betting man, I’d bet that (Lawson’s) not going to be hurt by this at all. And, if anything, it’ll probably end up helping him in the end. … It doesn’t put him out of the game whatsoever.”

Undrafted forward Dedric Lawson out of Kansas has committed to playing Summer League with the Golden State Warriors, league sources tell Yahoo Sports. He was the BIG 12’s top scorer (19.1) and rebounder (10.6).