What stood out at Tuesday’s KU camp scrimmage 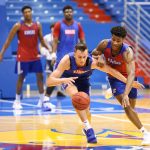 Kansas forward Mitch Lightfoot and Kansas guard Ochai Agbaji compete for a ball during a scrimmage on Tuesday, June 18, 2019 at Allen Fieldhouse.

NCAA rules prohibit college basketball coaches from watching their teams’ organized scrimmages in the summer, which was probably both good news and bad news for KU coach Bill Self this summer.

Self left after introducing the players and interacting with the young campers, but no doubt if he’d stayed he would have seen a few things he loved and a few things he hated during Tuesday’s first-team-to-80-wins scrimmage featuring a few former Jayhawks and the current roster.

Tyshawn Taylor, Travis Releford and Elijah Johnson — three of the 10 members of this summer’s “Self Made” TBT squad — suited up for the Crimson team, with Taylor hitting the game-winning shot. But we won’t worry too much about what those guys did or how they looked simply because their play does not mean much for the outlook of the current Kansas team.

If you haven’t seen them yet, though, be sure to check out our game highlights, which feature plenty of big moments from Taylor, including the one below that served as a welcome-to-the-big-time moment for KU newcomer Jalen Wilson.

Instead of worrying about the old guys, let’s take a quick look at a handful of the current Jayhawks who had both good and not-so-good moments during the final camp scrimmage of the summer.

• Success in camp games is all about effort. Usually, the guys who try the hardest and get after it the most find their way to some good numbers and sweet stat lines.

That certainly was the case Tuesday for KU big men David McCormack and Mitch Lightfoot. Neither player was flawless, but both played hard, hustled after every ball and operated with the purpose of both getting better and helping their teams win. It worked for McCormack, who finished the scrimmage with a game-high 28 points and delivered several highlight-type moments.

There was some talk from Self the day before the scrimmage about McCormack being the best big man shooter the Jayhawks have on the roster at the moment. And while it’s good news that the KU sophomore has developed a reliable jumper out to as far as 17 feet, it’s also worth remembering that he doesn’t have to shoot that shot.

McCormack knows that and no doubt will rein it in a little when the season actually arrives. But he looked good all over the floor on Tuesday, finishing with authority at the rim, hustling after loose balls whenever necessary and playing stout defense, all in the name of helping his Crimson squad win bragging rights.

None of his plays were as memorable as the one when McCormack raced to the corner and lunged to save a ball from going out of bounds by throwing it behind his back, only to come back on the very next possession and flush an alley-oop pass from Taylor to tie the game early.

And then there was his left-handed tip-in of a miss in close by Taylor. Falling away from the basket and on his way down from his first jump, McCormack simply stuck out his left hand, lightly tapped the ball to change its path and watched it roll around and fall through for two more points.

Self also talked about McCormack’s improved athleticism and explosiveness on Monday and both were on full display during Tuesday’s scrimmage.

• Lightfoot’s effort was a little less flashy and more of the gritty, grind-it-out, whatever-it-takes style you’ve come to expect from him.

It did, however, produce a team-best 24 points, which easily could’ve been 25 points in a winning effort had Lightfoot connected on either of the two free throws he got when the game was tied at 79 and he was on the line.

Shades of Christian Moody at Mizzou there.

Still, though, Lightfoot was strong all game and flashes his all-around skills, as well. He dunked in transition, got on the glass, hit a couple of jumpers and even went down in the post.

His best moment came when he posted up against Releford and, after taking some abuse from the veteran after a couple of dribbles, faded to the baseline to hit a nice fall-away shot.

Lightfoot’s name is again one of the more popular ones connecting to some redshirt chatter this offseason. And he said on Monday that he would be open to the idea if that’s the best thing for the team and for him. But there’s little doubt that his experience, toughness and never-back-down nature would have a role on this team if the minutes are there for him.

Even if they’re not and he does redshirt, having that kind of guy lead you and set that tone in practice can help the Jayhawks a great deal in 2019-20.

• OK. Back to the highlights. Which means it’s time to talk about sophomore guard Ochai Agbaji.

Agbaji played great in the first camp game a week ago, showing an improved jumper, an ability to get to his spots and get the shots he wanted and a willingness to attack the rim off the dribble from all angles.

What he showed this week was that he wants to team with Udoka Azubuike in returning the dunk to the KU lineup.

Agbaji was a dunking fool in this one, attacking the rim with authority off the bounce and flashing all kinds of flare in those moments when he had a chance to put on a show for the campers in the crowd.

I had him for three dunks in this one and all three were absolutely spectacular.

The first, which put the Crimson team up 8-6, was a breakaway dunk in which Agbaji decided to show off your basic windmill hammer. He executed it perfectly and hammered the rim, hanging high in the air to make sure he literally threw it down while he was up there.

The second, which cut the Crimson deficit to one at 25-24, was even more impressive, as Agbaji elected to put the ball between his legs and executed a perfect rendition of Isaiah Rider’s “East Bay Funk Dunk” from back in the day.

Ochai showing off with the in game eastbay #kubball@youngoch pic.twitter.com/s6SBmdF4Xm

The ball crawled over the rim a little bit on that one, but it still went down and it was still something to see Agbaji’s athleticism allow him to pull that off in the flow of an actual game.

The last, was equally as impressive as the first two but of a completely different style. Crashing the glass hard after a missed jumper by Taylor, Agbaji flew right by two players in Blue jerseys and hammered home a follow dunk to put the Crimson team up nine, 46-37.

Although Agbaji’s freshman season was absolutely spectacular and put him on the national map, it’s worth remembering that part of the reason he faded down the stretch a little bit was the injury he suffered to his shins that he dealt with for most of the second half of the season.

He appears to be fully healthy again today and has only gotten better. There’s little doubt that he’s in for a big sophomore season.

• Real quick, a couple of things Self is probably glad he missed that may not be seen again outside of the camp scrimmage.

Remember, though, these are just scrimmages, in front of campers, and the players realize that half of the fun for the young kids watching is to see them put on a show and try things they might not otherwise try.

The campers were so enamored by the big fella’s willingness to shoot the ball that they actually started chanting “Dok for 3, Dok for 3” toward the end of the scrimmage, begging him to attempt a 3-pointer to win it. He didn’t. Good move.

Azubuike knows where his bread is buttered and he showed that over and over in Tuesday’s scrimmage, dunking whenever possible and having a little fun while playing a lot in the process.

He even flashed some ball-handling skills, which also delighted the campers, going coast-to-coast after crossing over a teammate near mid-court on one occasion.

Rookie Jalen Wilson had a rough day shooting the ball — 5 of 20 overall and 1 of 13 from 3-point range — but that’ll likely be the last time you see that.

It’s been a whirlwind week for Wilson and it was obvious that he wanted to make a splash in his first unofficial game in the Fieldhouse. Give the kid credit for going for it.

He won’t shoot that poorly again in there. And even though he did, it didn’t take away from his willingness to be aggressive, make plays for others and keep attacking. That’s a way better good sign than the missed shots are a bad sign.