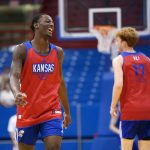 Kansas guard Marcus Garrett (0) has a laugh after an attempted dunk by Kansas forward Mitch Lightfoot went off the back iron during a scrimmage on Tuesday, June 11, 2019 at Allen Fieldhouse.

He called his shot several days ago and backed it up on Wednesday, shortly after 4-star wing Jalen Wilson committed to Kansas.

The 2019-20 Jayhawks are the No. 1 team in all the land in the preseason according to national college hoops analyst Jeff Goodman, of watchstadium.com, who bumped up KU from No. 2 into the top spot ahead of Michigan State.

If only this were the year the Jayhawks and Spartans were playing in the Champions Classic to tip off the season. But, hey, there is a real chance the two will meet in Maui later in November, so that works, too.

In his breakdown, Goodman said “the key move” to KU claiming the top spot was the recent addition of Iowa grad transfer Isaiah Moss, whom he dubbed a “proven shooter.” But on Twitter, Goodman also made it clear that he would not have made the move without Kansas landing Wilson, as well.

The Associated Press and preseason coaches polls won’t come out for months, but Goodman is far from the only national college hoops analyst plugging Kansas into the top spot in his or her preseason poll.

Former KU rival and FOX Sports Radio host Doug Gottlieb also is ready to give the Jayhawks the nod.

Even before landing Wilson, the addition of Moss alone was catching some attention. Gary Parrish, of CBS Sports, moved the Jayahwks up from No. 12 to No. 7 in his preseason poll after the addition of Moss was announced and it wouldn’t be a surprise if the addition of Wilson, KU’s highest profile prospect in the 2019 class, would move the Jayhawks up at least another spot or two in Parrish’s poll.

None of this matters today, of course, but the early praise for the roster Bill Self has built is merely another indication that the Jayhawks are loaded heading into the 2019-20 season and should once again be firmly positioned as national title contenders, perhaps even the favorite.

It’s worth noting that KU still has one scholarship remaining to hand out in the Class of 2019 should Self and company feel the need to do so. Adding yet another player would only strengthen KU’s depth and case for the top spot entering the 2019-20 season.

But don’t bank on it happening. Self told the Journal-World on Wednesday that he did not know whether he would give out that last scholarship this offseason or not, adding “it would have to be a no-brainer to use it.”