Jayhawks at Summer League: Svi Mykhailiuk off to another hot start in Vegas 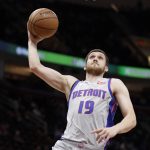 Detroit Pistons' Sviatoslav Mykhailiuk (19), from Ukraine, dunks the ball against the Cleveland Cavaliers in the first half of an NBA basketball game, Saturday, March 2, 2019, in Cleveland. (AP Photo/Tony Dejak)

Former Kansas Jayhawk Svi Mykhailiuk is at it again out in Las Vegas.

After shining with the Los Angeles Lakers’ Summer League squad in 2018, Mykhailiuk found a similar groove with his new team, the Detroit Pistons, over the weekend.

Showing steady feel and rising confidence, Mykhailiuk proved to be one of the Pistons’ main offensive weapons over the weekend.

In the opener, a 96-80 exhibition-type victory over Croatia, Mykhailiuk tallied 17 points on 5-of-10 shooting and also dished five assists while playing as one of Detroit’s primary ball handlers, willing and able to turn the corner and make plays for others. He hit 2 of 6 from 3-point range and also was hit with six turnovers.

In Game 2, a 93-73 Detroit win over Portland, the man who hit the biggest shot of KU’s Elite Eight win over Duke back in 2018 made his second straight start, scoring 18 points and dishing four assists in six fewer minutes. He hit 4 of 10 from 3-point range in that game and trimmed his turnovers down to two.

That first part could be the most crucial, given the potential the coaching staff sees for Mykhailiuk with the Pistons.

Asked recently by the Free Press what worked last summer and what he planned to do this summer, Mykhailiuk said simply, “I was just playing. It just happened to be good games. Just work hard and don’t think about what you’re doing on the court. Just play.”

Svi and the Pistons will look to move to 3-0 at 4 p.m. Monday against Indiana.

Here’s a quick look back at how a few other former Jayhawks fared in Summer League action over the weekend.

• In a battle of former teammates, Devonte’ Graham’s Charlotte Hornets topped Dedric Lawson and the Golden State Warriors, 93-85, in the Summer League opener for both clubs. Graham, who started and played 27 minutes, finished with 21 points, 4 rebounds, 4 assists and 3 steals. Lawson, in 10 minutes, matched Graham’s steal total and finished with 2 points and 3 rebounds.

Graham followed up his solid debut with a rough 3-of-13 performance in a loss to San Antonio on Sunday for 8 points in 26 minutes. Lawson, meanwhile, grabbed two more steals and scored 5 points in 15 minutes during Golden State’s bounce-back win over Toronto.

• Frank Mason III, who recently was waived by Sacramento but retained on the Kings’ Summer League roster to allow him to audition for other teams, did not play in the Kings’ Vegas opener.

• After a strong showing of shot making last week in Salt Lake City, shooting guard Malik Newman did not play in the Cleveland Cavaliers’ Vegas opener and then started during Sunday’s win over the Chicago Bulls. In 23 minutes, Newman finished with 5 points, 3 rebounds and 3 assists and hit 2 of 9 shots from the floor.

• Attempting to find a spot on an NBA roster after two stints overseas, Thomas Robinson’s run in Vegas is off to a slow start. After putting up better numbers in big minutes last week in Salt Lake City, Robinson scored 2 points in nine minutes in the Spurs’ opener and did not play in Sunday’s win over Graham’s Hornets.

• Cliff Alexander, who’s also trying to find his way back into the league, scored 11 points on 3-of-6 shooting from the floor and 5-of-6 shooting at the free-throw line for the Los Angeles Clippers in a win over the Lakers. LeBron and Anthony Davis versus Kawhi and Paul George it was not, but Alexander added four rebounds in 15 minutes in the Clippers’ Summer League opener.

• Former KU center Jeff Withey started for the Washington Wizards in their Summer League opener, playing 12 minutes and recording 3 points and a block in a win over New Orleans. Rookie and reigning No. 1 overall pick Zion Williamson did not play in the game.

• Former KU big man Landen Lucas did not play in the Atlanta Hawks opener and added 1 point and three rebounds in eight minutes off the bench in a 24-point Atlanta loss to Minnesota on Sunday.

• Lagerald Vick (Houston) and Andrew White III (New York Knicks) did not appear in the box scores of those teams last weekend. And former Jayhawk and Kansas native Conner Frankamp, who finished his career at Wichita State, received a pair of DNPs (Did Not Play) with the Los Angeles Lakers.