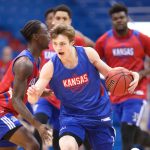 Kansas sophomore Ochai Agbaji had the rare advantage of a little history with one of the Jayhawks’ four incoming freshmen at his disposal when the newcomers reported to campus in June.

But that did not keep Christian Braun from surprising his former AAU teammate — both played for MoKan Elite before joining the Jayhawks — during the first few weeks of pickup games and camp scrimmages.

“He’s really tough,” Agbaji said of Braun, the 6-foot-6, versatile guard from nearby Blue Valley Northwest High. “That’s what I’ve learned. Just playing with him for (a few weeks) now, he’s tough. He doesn’t back down.”

While Braun’s game is built on that blue-collar vibe, the Gatorade Player of the Year in Kansas for the 2018-19 season can do much more than hustle.

His jump shot, which comes as the result of great elevation and perfect technique at the top, could become a real weapon for a KU team in need of outside shooting, and his vision, athleticism and fearless demeanor already have allowed Braun to prove he belongs.

Never was that more obvious than during the first camp scrimmage game, when Braun, giving up 3 inches and about 45 pounds, dug in and did his best to guard KU big man Silvio De Sousa in the post.

“He’s always stepping up to the challenge,” Agbaji said of Braun. “Whether it’s guarding Silvio in practice or whatever, I really like that about him.”

Braun’s attitude is indicative of that owned by KU’s entire freshman class, a group of 4-star prospects who come in with something to prove and all the confidence in the world.

Point guard Mackey McBride is a worker. He runs drills at full speed every time and does not let a missed shot or bad step rattle him on the next rep. There’s little doubt that he’ll need some time to adjust fully to the college game, but McBride is a mature player with a no-nonsense approach.

Wing forward Tristan Enaruna is the definition of versatile. His demeanor is such that he never appears to be overwhelmed, and his length, athleticism and attitude allow him to find ways to fit in all over the floor. Enaruna has emphasized improving his jump shot this summer, but he has not let that keep him from attacking the rim whenever possible.

And then there’s Jalen Wilson, the latest addition of the bunch, who came to town firing. Three days after arriving in Lawrence after signing with Kansas, Wilson played in his first camp scrimmage and kept firing up shots. He didn’t make many of them, but his confidence never dipped and he continued to show that he’s comfortable out there and is just as happy to get others involved as he is hunting his own shots.

Like Agbaji with Braun, KU coach Bill Self lauded Wilson’s grit, as well.

“He gives us size, he gives us toughness and he gives us skill,” Self said of Wilson. “He just knows how to play. He’s a winner.”

Agbaji likes that about Wilson and all of the KU freshmen.

“I know they’re coming in with the mindset that they have to be aggressive,” the sophomore guard and candidate for national breakout player of the year said. “They know their roles and, whatever (those are) going to be, I think they’ll stick to it and that’s going to help our team.”