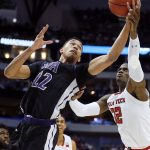 In a matter of hours, Class of 2019 shooting guard Cassius Stanley will make his decision official by announcing his pick from finalists KU, Oregon, UCLA and Duke around 2:30 p.m. central time.

Many recruiting analysts have Stanley headed to Duke, the last of the four programs to get in on the ultra-athletic shooting guard from North Hollywood, Calif.

While the Jayhawks wait for the official word, a player with a far lower profile but possibly even more importance will be on KU’s campus conducting an official visit and exploring the idea of joining KU’s roster in a few months.

His name is T.J. Holyfield. He’s a 6-foot-8, 215-pound graduate transfer from Stephen F. Austin. And while there’s no known time table for Holyfield’s announcement or decision, it’s possible that his visit could be among the more important events to take place on the recruiting trail during the next several weeks for a Kansas program looking to restock its roster.

Coming off a shoulder injury that cost him the 2018-19 season before it began and allowed him to become a graduate transfer in the first place, Holyfield represents the kind of size and experience that Kansas could need up front if Dedric Lawson stays in the NBA draft — as expected — and neither Silvio De Sousa (appeal) and Udoka Azubuike (uncertain future) are around to help Mitch Lightfoot and David McCormack hold things down in the post.

During the 2017-18 season, when he helped lead the Lumberjacks to the NCAA Tournament, Holyfield averaged 12.9 points and 6.4 rebounds per game, while chipping in with an assist here, a block there and steal or two somewhere else just about every game.

Beyond those numbers, Holyfield flashed the type of versatility and consistency that fits well with today’s evolving game, shooting 55 percent from the floor and 41 percent from 3-point range (28 of 68) while also knocking down 75 percent of his free throw attempts.

Kansas is far from alone in its pursuit of Holyfield, the type of player who would receive automatic playing time and fit well into just about any roster for the 2019-20 season.

Holyfield visited Texas Tech over the weekend — a program that made it all the way to the national title game last season with two grad transfers (Matt Mooney and Tariq Owens) playing major roles — and, before that visit, the smooth forward told Jarett Johnson, of InsideTheRedRaiders.com, that he already had visited Miami (Fla.), as well.

Add Illinois and Oregon to his final five and expect Holyfield to make a decision after official visits to all five finalists have wrapped up.

Holyfield and Stanley — stay in touch with KUsports.com for the latest on his decision later today — are just two of the pieces in what could be a wild few weeks for Kansas recruiting.

The Jayhawks are targeting other grad transfers and still have a few highly ranked prep prospects on their wish list, as well.