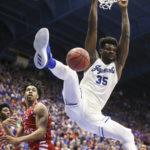 Kansas center Udoka Azubuike (35) hangs on the rim after a dunk before Louisiana forward Malik Marquetti (1) during the second half, Friday, Nov. 16, 2018 at Allen Fieldhouse.

The NBA’s early-entry deadline for the 2019 draft has passed without so much as a peep out of Kansas junior Udoka Azubuike.

While that does not mean that the 7-foot center who tested the waters last year only to return for his junior season at Kansas, did not declare for the draft, it certainly makes such a scenario more likely.

But Sunday’s news — or lack thereof — does not exactly create a crystal clear picture of Azubuike’s future.

While keeping a declaration from the public eye suggests that Azubuike will return to KU for his senior season in 2019-20, it does not guarantee it by any means.

There’s always the chance that Azubuike, who missed all but nine games of the 2018-19 season because of an injured wrist, could have been waiting to announce a decision — either way — until after Easter, perhaps sometime Monday.

KU coach Bill Self, as late as 7 p.m. Sunday night, told the Journal-World he had not heard a final decision from Azubuike and Self, last week at KU’s season-ending team banquet, told Azubuike in front of a crowd of more than 500 KU supporters that the program would always have the big man’s back.

“I tell Dok this all the time and I do believe this,” Self said at the banquet. “He’s going to get the last laugh on everybody. But his attitude’s gotta stay great and I’m so proud, first of all, how he handled being hurt the second time, his sophomore year, and how he handled this year. He was still positive, he was not a negative guy, even though his window of opportunity was shrinking on him and, no, there was nothing he could do to change it. I thought his attitude was unbelievable. And, Dok, just hang in there and whatever you decide to do you’ve got us, no matter what. Love ya. And you’ll get the last laugh.”

Twitter was abuzz throughout the day Sunday with KU fans waiting for word from Azubuike. A hashtag “UdokaWatch2019” was a popular place to mine for information and KU fans and media members continually checked in about the decision throughout the day.

Azubuike’s decision whether to test or not likely was made more difficult by the fact that he is not expected to be cleared for full basketball activities until June. The wrist injury he suffered as a true freshman — identical injury, opposite hand — kept him from returning in full until the summer and could have caused an issue with teams wondering if he could workout in the coming weeks or attend the NBA’s pre-draft combine.

Azubuike attended the pre-draft combine in 2018 and received valuable feedback about what NBA personnel wanted to see from him during his junior season. Unfortunately for the native Nigerian, the injury bug hit again just before Big 12 play and Azubuike did not get to show whether he had improved in certain areas or not.

The two wrist injuries are among five significant injuries Azubuike has suffered during his time with the Jayhawks.

The first wrist injury, which hit in late December of his freshman year, cost him all but 11 games of his rookie season. After that, a lingering back issue that flared up but did not causee him to miss time midway through his sophomore season and a serious knee injury that hit just before the Big 12 tournament of the 2016-17 season, cost him part of the postseason. And before his second wrist injury during the 2018-19 season, Azubuike missed several games because of a severe ankle sprain.

One of the things some NBA officials wanted to see is what Azubuike could do with a full season of injury-free basketball.

Whether Azubuike stays or goes, the Jayhawks still have plenty of work to do on the recruiting trail in the coming months and plenty of resources with which to work.

As of Sunday night, KU had six scholarships available to add players to the 2019 class that currently consists of 4-star guards Christian Braun and Issac McBride.

Any of that foursome that declared for the draft — along with Azubuike — could return to KU next season provided they follow NCAA rules regarding their work with agents and withdraw their names from the draft pool by May 29.

De Sousa has said he will be back if he wins his appeal of a two-year NCAA suspension. And people close to the KU program believe Lawson and Grimes are likely gone and Dotson is a likely candidate to return.

Those realities figure to make the next several weeks both busy and incredibly interesting as the KU coaching staff races to refill its roster, with or without Azubuike in tow. As of deadline time on Sunday night, though, all signs were pointing toward that being with Azubuike in the lineup for the 2019-20 Jayhawks.