Kansas coach Bill Self far from panicked about current recruiting challenges: ‘Oh, we’re going to get some guys’ 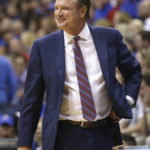 Kansas head coach Bill Self flashes a smile as the Jayhawks pull away during overtime on Saturday, Dec. 1, 2018 at Allen Fieldhouse.

With just two players signed in the 2019 recruiting class and neither one ranked higher than 94th in the national rankings per Rivals.com, the outsider’s view of the current state of Kansas basketball recruiting is that things have hit a rough patch.

The man on the inside, however, sees things a little differently, and Tuesday night, after KU’s season-ending banquet, Bill Self talked in general terms about where things sat with KU’s current recruiting efforts.

Although no definition of “some guys” was given, Self projected the image of a coach in complete control of the situation, one that even seemed to border on optimism for the immediate future.

Top targets Matt Hurt (No. 7 overall per Rivals.com) and Cassius Stanley (No. 33) will announce their decisions later this week. And Kansas remains in the running for both players, even if the Jayhawks currently look like they’re running second to Duke in both cases.

Even if KU strikes out on both Hurt, who will reveal his choice Friday and Stanley, who will announce his pick Saturday, Self said he felt good about where things sat with his overall roster and emphasized that he and his staff would have a much clearer picture of its needs and challenges “in the next 10 days.”

“You guys can look at it however you want, but you’ve got a chance to be better before the season even starts next year,” Self explained. “You’ve got a chance without adding any players. So I’m pretty optimistic that things will fall into place.”

What Self likely meant by that read has to do with the stay-or-go decisions facing players like Devon Dotson, Udoka Azubuike, Quentin Grimes and Silvio De Sousa.

Much like two years ago, when KU missed out on all of the top high school point guards it went after but landed a big victory when Devonte’ Graham elected to return for his senior season, KU’s outlook for the 2019-20 season would improve dramatically if even just Dotson and Azubuike decide to return.

Right now, KU has five scholarships open and could have two more to play with if Azubuike and De Sousa enter their names into the 2019 NBA Draft. That would push the number of open roster spots to seven and create a situation unlike any we’ve seen in recent memory.

“That’s if everybody leaves,” Self clarified. “But everybody’s not going to leave. But, yeah; I’d say if we need to sign seven this spring, that wouldn’t be the ideal situation.”

As for his thoughts on why a blue blood program like Kansas is in this situation in the first place, Self said there was “no question” that the uncertainty surrounding Kansas and the federal investigation into college basketball had hurt the program’s recruiting efforts, adding that recent reports that Self was leaving KU did not help either.

Self on Tuesday adamantly reiterated that he had no plans to leave KU any time soon and even said he was not upset by other programs using KU’s current struggles against them in recruiting battles from coast to coast.

“If somebody told me that there’s a report out there that someone’s going to take another job and we were going head to head with that other school, that article might find its way to the right eyes,” Self conceded. “That’s not being negative. That’s just how it is.”

There was, however, one thing Self said he would not do to bolster the look of his next team and that was to spend any amount of time trying to talk players into staying.

He never has done that in the past and is not about to start now.

“Some of you may think that the most important recruiting we could do is right here on campus,” he said. “But I’m not going to do it. If it’s best for them to go try (to enter the NBA draft), then go try. That will determine if they come back or not. I know I have strong feelings (about) what I think would be smart. But they can investigate it themselves, with their families, to determine what’s smart. And I think we’re going to be just fine moving forward.”