Welcome to the year of Silvio De Sousa 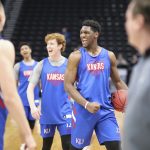 Silvio De Sousa wasn’t just the man of the hour in Lawrence when news broke on Friday that the NCAA had backed off its bizarre decision to ban him for a second season.

Nor was De Sousa only the man of the day, even though his name was the predominant topic of discussion throughout this Kansas basketball crazed city.

Welcome to the year of Silvio De Sousa.

Yes, the Jayhawks’ frontcourt depth went from solid to staggering with De Sousa’s addition. But the team is getting much more than an extra big body to occupy the paint. The rugged interior play of the 6-foot-9, 245-pound forward from Angola will no doubt prove crucial to KU’s success. Perhaps even more importantly on that front, though, De Sousa will carry with him an energetic aura powerful enough to influence his teammates.

De Sousa is a uniquely positive person. Always upbeat. Almost always smiling. That didn’t change during a lost sophomore season either. First while waiting to hear whether the NCAA might clear him this past season after looking into his guardian Fenny Falmagne’s role in accepting money from a former Adidas executive who later was declared a KU booster, then dealing with the blow of the NCAA’s initial ruling that De Sousa would be ineligible for two straight seasons and then while waiting again, this time for the appeal process to play out, De Sousa, while challenged by it all, remained optimistic.

That didn’t go unnoticed by his KU teammates or coaches. They marveled throughout the ordeal about how De Sousa handled everything. And the way he kept working and battling in KU practices when no matter how good he looked it wouldn’t get him any in-game minutes.

Those types of displays are inspiring. De Sousa is someone his teammates will fight for and a player Bill Self and his assistants will continue to love coaching.

Speaking of love, now that he has won his appeal against the hated NCAA, you won’t be able to find many Jayhawks more treasured by the fan base than De Sousa. As difficult as it is for opponents to win inside Allen Fieldhouse on a yearly basis, wait until they try to pull that off during the 2019-20 season, when De Sousa’s powerful slams and hard-nosed plays inside will exponentially ignite the fans’ fervor.

Grateful to have his basketball career back when it seemed equally as likely as recently as Thursday that he would never again put on a KU uniform, De Sousa should play with more tenacity than ever. Sprinting harder on fast breaks. Diving after more loose balls. Combating anybody and everybody for rebounds. Toiling away and cherishing every second of it.

“All those days and nights wondering what would happen,” De Sousa said in a statement released by KU after the forward was cleared of his guardian’s wrongdoing, “this makes it all worth it.”

The months it took for KU and De Sousa’s lawyer to battle for this ultimately successful appeal have paid off. And with it the Jayhawks have De Sousa as their heart and soul of the rotation. The team needed an inspiring presence after a 2018-19 season that included the end to KU’s Big 12 title streak and a second-round exit from the NCAA Tournament.

De Sousa’s basketball skills alone don’t make him a savior. But with his determination, attitude and willingness to scrap, as well as the feel-good vibes of playing with a freed De Sousa fueling the Jayhawks around the inspired big man, Self should find it easier to get the most out of his roster next season, during De Sousa’s victory lap.