Done in Sacramento, where might new free agent Frank Mason end up? 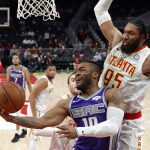 FILE — Sacramento Kings guard Frank Mason III (10) goes in for a basket as Atlanta Hawks forward DeAndre' Bembry (95) defends during the second half of an NBA basketball game Thursday, Nov. 1, 2018, in Atlanta. The Kings waived Mason on July 4, 2019, making him a free agent. (AP Photo/John Bazemore)

For now, Frank Mason III is a Sacramento King. Kind of. But not really.

The franchise that drafted the former Kansas All-American in the second round of the 2017 NBA Draft announced earlier this week it is waiving Mason but keeping the 25-year-old point guard on its summer league roster.

The Kings seem to be doing Mason, suddenly a free agent, a favor by taking him with them on their trip to Las Vegas. When they waived him on Independence Day the summer league rosters for the rest of the league were pretty much set, leaving Mason few other options in a short window of time. If the Kings really do intend to play Mason — and that seems to be the case, due to how much respect he earned from the organization over the course of two seasons — other teams will be able to watch him in person in Vegas and gauge their interest in a prospect who was college basketball’s national player of the year just two seasons ago.

In a league abundant in point guards, Mason may not have many suitors. Still, there are some potential employers out there for Mason and other low-cost point guards on the market.

And if you’re a free agent looking for a chance and not one worried about maximizing your money, what better place to cast your eyes than the Los Angeles Lakers? One of the league’s marquee franchises, the Lakers have the bulk of their money tied up in LeBron James and Anthony Davis. And once reigning Finals MVP Kawhi Leonard decides where he wants to sign, the Lakers will have to start filling out a mostly empty roster, with or without Leonard.

As of Friday, the Lakers were tied to all of six players: James, Davis, Kyle Kuzma, Jared Dudley, Troy Daniels and Zach Norvell Jr., an undrafted rookie from Gonzaga whom they signed to a two-way contract. They also could sign second-round draft pick Talen Horton-Tucker, from Iowa State.

Each NBA team has 15 available roster spots, with 13 players active on game days. So the Lakers have some work to do in filling out the rest of their team, particularly at point guard, considering they don’t even have one at this juncture. (Yes, LeBron is essentially a gigantic point guard, but you get it.)

Now, James’ history indicates he’d want a veteran point guard on his team, and Mason isn’t considered a starting level floor general in the NBA, so the Lakers — if they were interested in Mason — wouldn’t be looking at him as someone to play major minutes. But if they are in desperate need of a backup point guard or maybe even a third point guard on the cheap, Mason just might be able to make his case for that job with a strong showing at the Las Vegas Summer League, where the Kings open their schedule Saturday night versus China.

During the 2018-19 season, Mason played more than 15 minutes in a game just once from January through April, and that came in the Kings’ final game of the season. Mason had 15 points and 1 assist off the bench, while shooting 6-for-13 from the field in what amounted to a meaningless regular season finale.

That’s why the Las Vegas Summer League — the Sacramento Bee reported Mason missed the California Classic earlier this week due to soreness in his right hip — will be so crucial for the former KU star.

Maybe some team’s scouts already like Mason’s bulldog mentality even if they have seen his flaws against real NBA competition. Perhaps other team’s scouts have already written Mason off after he was unable to find consistent minutes with Sacramento.

Either way, Mason will need to make the most of his opportunity with the Kings in Vegas while his agent pitches the idea of signing him to any team willing to listen.

As Mason told The Bee just a week ago, before the Kings cut him loose, he has one objective this summer.

“My job is to get better and focus on what I can control,” he said. “Other than that, it’s all business, so whatever happens happens. I just have to be ready and stay professional.”

Supply and demand will dictate where exactly Mason spends what could be his third season in the NBA. The Lakers aren’t the only team that could still use some depth at point guard.

The Hornets might need a third point guard to put behind Terry Rozier and Mason’s old pal, Devonte’ Graham. The Nets, although they signed free agency’s top point guard this summer, Kyrie Irving, don’t yet have a third option at the position to put behind Irving and Spencer Dinwiddie. Oklahoma City, as well, lacks a third point guard to backup Russell Westbrook and Dennis Schroder. Milwaukee might need some depth at that spot in case Eric Bledsoe and George Hill don’t hold up for the full season.

It’s also important to remember the market is always fluid, especially this time of year, when NBA teams are more eager to make roster reshaping moves in the offseason. A team that doesn’t need someone like Mason now just might be interested in him one transaction later.

For organizations more intrigued by the idea of a younger option at point guard in free agency, Mason has competition — think: Quinn Cook, Tyus Jones, Delon Wright and Trey Burke, for example.

Of course, there still are veteran free agents out there, too — such as Rajon Rondo, Jerryd Bayless, Raymond Felton, Shelvin Mack and Jeremy Lin.

Mason is too dogged to let any of these factors faze him. This is a backed into a corner type of summer for Mason in terms of his NBA future. But given his mental toughness it’s difficult to see it not working out for him eventually.

Even if his route begins in the G League next season, roster spots inevitably open up throughout The Association. Odds stacked against him won’t stop Mason from working toward a spot in the NBA. He’s not the type to flame out after two years.

@SacramentoKings thanks for allowing my dreams to come true. It was truly a blessing to be apart of the organization. Excellent group of guys in the front office and a special coaching staff you guys bought along. Amazing training staff and strength & Conditioning Coach.