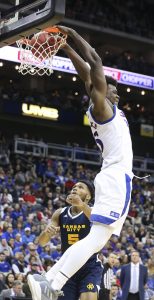 Kansas City, Mo. — The out of nowhere David McCormack performance Saturday at Sprint Center diverted attention from another equally encouraging subplot for the No. 2-ranked Kansas basketball team.

Udoka Azubuike, the Jayhawks’ starting center who plays with such gravity that KU’s other two bigs can at times get lost in the rotation shuffle, impacted the 98-57 rout without thinking once about trying to pad his own scoring numbers while the heavy favorite conquered Kansas City.

Effective without forcing the issue inside to overpower smaller defenders in the post, Azubuike instead set up teammates as a passer on offense and provided KU with the paint protection it needs on defense.

KU’s 7-foot senior only played 17 minutes but easily influenced the tone of the game with his 9 points, five rebounds, four assists and three blocks.

In the past, sometimes due to his obvious displeasure with his own injury issues, Azubuike could slip into a foul mood. KU head coach Bill Self noted the starting center’s mindset lately has been “great.”

“David scored all the points, deserves credit for doing that but I thought you’ve seen a guy kind of grow up,” Self said in reference to Azubuike, “when he’s wanting the ball just so he can be a passer today.”

Even if it came against an outmatched Roos team (5-7) that, as of Saturday evening, ranked No. 267 in the country according to KenPom.com, the big man from Nigeria matched his career high with those 4 assists — one to Devon Dotson for a layup in the first half, and three more in the opening minutes of the second, for a Dotson 3-pointer and two McCormack layups.

Azubuike wasn’t nearly as functional a passer when he first got to Lawrence in the summer of 2016. Of late, though, the likelihood of Self praising the center in practice for his willingness to feed other scorers has increased. When Self sees a pass he really likes from Azubuike, he’ll call him Bill Walton.

“I don’t even know if he knows who Bill Walton is,” Self added of the former UCLA, Portland Trailblazers and Boston Celtics center.

Even if Azubuike’s path to becoming a better passing big man didn’t involve watching grainy YouTube videos, he has put in the work and the results are apparent.

“I think he’s getting better. But the one thing that’s encouraging, if anything, is when you’re trapped you should embrace the trap,” Self said. “And he sometimes wants to get it out of his hands as quick as possible.”

As the coach pointed out, those double teams and traps on Saturday came with much smaller defenders trying to swarm Azubuike than he will see in Big 12 play or in Philadelphia next week at Villanova.

“But I thought he looked poised and comfortable,” Self said, “and not panicked when he caught the ball in tight.”

That’s all the result of the work KU and Azubuike put in to address that very skill set during practices. Point guard Devon Dotson said coaches placed the center in different situations in which he’s asked to pass over or through pressure.

“When the traps come just being more comfortable with it and embracing the trap. So he’s he developed. He’s more experienced, so that helps a lot, too,” added Dotson, who said the big man has learned form his past mistakes and made corrections.

That’s one reason why Self told Azubuike after a game in which the center went 4 for 4 from the floor that it was one of his better offensive games.

But there was even more to like from Azubuike’s outing.

“I thought Dok did pretty well,” Self went on. “Obviously went after balls, trying to block shots and stuff. So we can certainly go hard a lot better than we did, but having Dok as a rim protector like that I think is a big step for us in the right direction.”

In KU’s past four games, Azubuike has swatted 11 shots. Self didn’t know if he could explain what led to the much needed uptick.

“He’s not going to shoot a lot of technicals in the NBA for respective franchises, so he needs to play to his athletic ability and strength,” Self said, making light of the center’s sub-40% career free-throw numbers. “And I just think his energy level and his quickness off the floor has been better. But I don’t attribute it to any particular thing other than just his mindset’s better.”

Azubuike is at ease on the basketball court, even when he’s not dominating the stat sheet. Mark it down as another crucial development in the Jayhawks’ nonconference run.

With a 7-footer picked as the Big 12’s preseason player of the year willing to do whatever’s asked of him, it makes him even more effective and enhances the Jayhawks’ chemistry to boot.