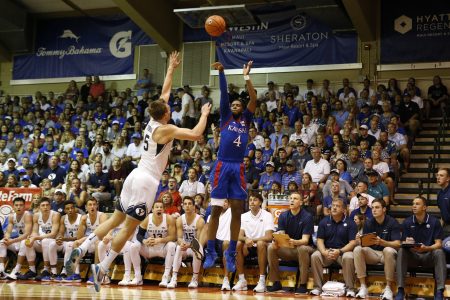 Get Bill Self talking about his Kansas basketball team’s 3-point defense and his train of thought will eventually bring him to the arc on the opposite end of the floor.

Self obviously wants his Jayhawks to play smarter perimeter defense, so future opponents don’t torch them the way Dayton did (16-for-33 from deep) at the Maui Invitational.

Those 3-pointers surrendered won’t be accompanied by as much dismay if the Jayhawks can be less sporadic in their use of those same shots on offense.

“Part of the deal is we need to start scoring the ball more behind the arc ourself,” Self diverted earlier this week, during a discussion of KU’s defense.

Self considers KU’s victories over BYU and Dayton in Maui two of the team’s best games to date, and the Jayhawks shot 4-for-18 in the semifinal and 4-for-11 in an overtime title game. BYU outscored KU 27-12 on 3-pointers and Dayton nearly knocked off the Jayhawks by dominating in that category, 48-12.

“We need to obviously be more consistent beyond the arc,” Self said. “We can’t be outscored by 36 points consistently and have a chance to win.”

So where do the No. 2 Jayhawks (6-1) find that shooting stability? Devonte’ Graham and Svi Mykhailiuk are not walking through that door. Fortunately for Self and his players, this roster has a shooter who would fit right in with that one-two perimeter attack.

The Jayhawks will tell you we haven’t yet seen the best of graduate transfer Isaiah Moss. Yet the ready-to-shoot reserve in six games played easily stands out as the best 3-point marksman on the roster. The 6-foot-5 senior from Chicago is 11-for-24 (45.8%) on a team that has combined to shoot 49-for-137 (35.8%) on 3-pointers.

As the Jayhawks aim to keep progressing in their return to action against No. 20 Colorado (7-0), getting Moss going will be a priority.

“I don’t think Isaiah’s himself yet,” Self said of Moss, who played 30 or more minutes in KU’s previous two wins but shot a combined 1-for-6 on 3-pointers against BYU and Dayton. “But I think he’s gaining on it. If you could get Isaiah shooting the ball and us doing a better job of knowing how to get him open, and the staff doing more things to get him open, then I think we can become better offensively.”

Moss is a spot-up, catch-and-shoot weapon if KU can just figure out how to use him. As great as Moss is at blending in and providing spacing when the Jayhawks play four guards around Udoka Azubuike, David McCormack or (occasionally) Silvio De Sousa, Moss can take this team to another level as a dependable shooter.

A right hamstring injury that forced Moss to miss KU’s lone loss, to Duke in New York, may be another reason the Jayhawks haven’t completely unlocked his abilities as a complementary threat. That’s Marcus Garrett’s theory, at least.

“I feel like we really haven’t got to see what he can really do yet,” Garrett said, after calling Moss a “great” 3-point shooter.

Of course, the Jayhawks can’t put all of their 3-point hopes on Moss. Self said starting guards Devon Dotson, Ochai Agbaji and Garrett will need to contribute, too, as the Jayhawks look for that steady outside offense.

Self doesn’t hide the fact that Moss’s production has been inconsistent, either. And he puts a lot of that on himself, the staff and the players.

And the Jayhawks need consistent contributions from Dotson and Agbaji in order to stretch the floor and get the most out of their 3-point shooting, while the coaches figure out how much they can rely on another possible floor spacer, freshman wing Christian Braun, who is only averaging 8.6 minutes a game at this point.

Dayton had the perfect type of personnel to test KU’s 3-point shooting defense. But in six other games, KU opponents are a combined 45-for-161 (28%) from long range.

As work continues on that end of the floor, it’s not realistic to expect the Jayhawks to become a great 3-point shooting team this season — even if they do get Moss going. At this early stage of the season, they’re averaging exactly seven makes a game on 19.6 attempts (35.8%).

“We’re not going to make 10 a game,” predicted Self, who knows the shooting abilities of his players better than anyone. “We might have some games where we make 10, but I still think we can average seven 3s a game — I think that’s basically what we’re averaging now. We’ve had two games where we’ve made 22 combined, so it’s a little misleading.”

KU also went 1-for-14 from distance in a win over East Tennessee State this season. So it’s hard to tell going into any contest what the Jayhawks will get out of the 3-point line.

It would seem many opponents this season will invite KU to try to beat them from outside as a tradeoff for taking away Azubuike inside. As Self referenced, the Jayhawks need to unleash Moss in those situations. Once he becomes a dependable scorer from outside, it will be easier for KU to play to its 3-point shooting ceiling — even if it’s one that isn’t too high.