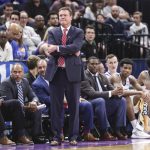 Kansas head coach Bill Self and the bench watch in silence during the first half on Saturday, March 23, 2019 at Vivint Smart Homes Arena in Salt Lake City, Utah.

Since the day he accepted the position 16 years ago, Bill Self’s job title at the University of Kansas has been head men’s basketball coach. But it might as well be general manager, CEO, president of basketball operations and czar of roster engineering, too.

Sure, his assistants help Self a great deal in both discovering and zeroing in on talented prospects on the recruiting front, but it’s ultimately up to the commander in chief of KU basketball to determine the composition of KU’s roster each and every season.

Through the years, Self has even often mastered the art of college basketball’s version of the waiver wire, with more than a dozen players transferring in and even more transferring out during his tenure. All the while, he’s adding high school prospects and often dealing with the possibility of any number of current players deciding to leave Lawrence early in pursuit of their NBA dreams.

As well as Self has handled that juggling act, tweaking KU’s roster has now become more difficult than ever. Rules currently in place allow college players to declare for the draft as underclassmen, do so with the help of an NBA-certified agent, receive feedback about where they may land in the first or second round and then decide whether it’s in their best interest to return to school or stay in the draft.

These rules exist to help each player make the best possible decision for his future. And that’s the way it should be.

Nine rotation players appeared in KU’s season-ending loss to Auburn in the NCAA Tournament’s second round. Most likely, at least four of them — Dedric Lawson (draft), K.J. Lawson (transfer), Charlie Moore (transfer) and Quentin Grimes (draft) — will be gone.

Then, as of Tuesday night at least, there’s the who knows category, occupied by ineligible through next season Silvio De Sousa and injured Udoka Azubuike.

If both of those bigs decide to go pro, too, Self and his staff, in a doomsday scenario, could have as many as six or seven scholarships to fill for next season, with only two Class of 2019 recruits — Christian Braun and Isaac McBride — currently on board.

And with those dipping their toes into the NBA Draft waters, there’s always the new possibility, even if they have an agent, that they could decide to come back by withdrawing from the draft.

“I think the new rule, maybe it’s a good rule, maybe it’s not,” Self said Tuesday night, following the team’s end of season banquet. “I think time will tell. But I do think it makes it hard to manage rosters, because it’s much easier to say ‘I’m gonna try something.'”

If anybody can pull off this dance, it’s Self. He made it clear that KU’s staff won’t sit back idly, waiting to hear what each potential draftee will decide.

“But the thinking of it is that if you open yourself up to try, then certainly you’re telling us that it’s OK to go sign somebody. So that’s probably not the ideal situation to be in. But I’d much rather have too many than not enough,” Self said.

It appears Dotson is using the early entry rules the way every talented player should, as an information-gathering tour that will set him up someday down the line for a successful NBA career. So at least some semblance of stability (probably) exists on that front.

But how will KU fill the rest of the roster with rotation-level players when the coaches don’t yet know how many spots they have to fill?

The man in charge, as you might have guessed, hardly seemed worried.

“So we’ve got some things that we’re working on to do,” Self said. “But I think in the next 10 days a lot of this is gonna clear up.”