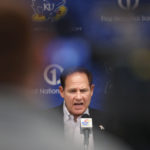 The Kansas football fans who showed up Saturday for the Jayhawks’ spring game at David Booth Kansas Memorial Stadium got a bit of a surprise during one of the breaks in the action.

And for that matter, so did the man responsible for drawing so many of them there.

Les Miles admitted Monday he was caught a bit off guard when a skit he and KU basketball coach Bill Self teamed up for began playing on the giant video board at the south end of the stadium.

“I was walking off. I had no idea. I was oblivious to where they were going to play that,” Miles said. “I mean, if somebody would have asked me before. … No, obviously they’re not gonna play it at the spring game.”

“So I’m walking off the sideline, I go, ‘I’m hearing my voice. What am I doing?’ And I look over there,” Miles described of his reaction when it began playing, “and I go, ‘You’ve gotta be kidding me.’ I bet I waited three to five minutes before I said, ‘What a terrible waste of a jumbotron.’ And off I went.”

The two don’t build a bunk bed together, but the video opens with Self asking Miles a simple question, once the football coach enters the room: “Who are you? And why are you in my office?”

Before long, Self and Miles are in staredown mode, both claiming to be “the Kansas ball coach.”

After some namedropping boasts about players each has coached in the past — Self shows off a photo of Andrew Wiggins and Joel Embiid before Miles lets him know he coached Odell Beckham Jr. — the two compare national championship rings, as well as pictures from each of their team’s trips to the White House.

The scene culminates with Self asking, “What is your favorite rapper from Florida?”

That, of course, prompts Miles to deliver one of Ferrell’s memorable lines from the movie, “Did we just become best friends?” before the two high five.

Between the “Step Brothers” parody and Miles’ recent video announcing the Rick Ross performance for KU’s spring game, the 65-year-old who led LSU to a national title has proven open to embracing his less serious side at KU — even if there is some slight hesitation.

“What goes through my mind,” Miles said of when such ideas have been pitched his way, “is ‘I hope that my wife and kids don’t see this.’ That’s the first thing that I think. I enjoy the challenge. I really enjoyed the Bill Self thing. That was great fun.”

The way Miles sees it, “you only get to go around one time. There’s no do-overs. You might want to have some fun.”