Read Across Lawrence 2018: the heartfelt middle-school story of Wonder 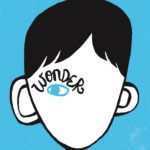 “Everyone in the world should get a standing ovation at least once in their life because we all overcometh the world.” -Auggie, “Wonder”

Whenever I’m handed a book with the promise “This will make you cry,” I’m always a little skeptical. A montage of dogs seeing their owners after they get back from deployment, I am bawling, but it is the rare book that makes me break down and cry. So when “Wonder” by R.J. Palacio was handed to me and I was told that it was a tearjerker that might become the Lawrence Public Library’s Read Across Lawrence book, I was skeptical.

Was this book really as good as I had been hearing for years? Would it really appeal to kids and teens and adults? Yes. Although I wasn’t overcome with gut-wrenching sobs while reading it, I can unequivocally say that “Wonder” has real emotional impact. It leaves you with profound gratitude. The overarching message of self-love and that there’s a little “wonder” in all of us bubbles through you, and even though the book is filled with cruelty and hardship, “Wonder” uplifts.

Auggie Pullman is much like other 10-year-olds: he’s obsessed with “Star Wars,” he loves his dog and he’s nervous about attending middle school. But there’s one thing that very much sets Auggie apart. His face. He’s had 27 different surgeries to correct facial abnormalities, but he still doesn’t look normal. He “won’t describe what he looks like. Whatever you’re thinking, it’s probably worse.”

We do get insight from other people in Auggie’s life, as he is not the only narrator of “Wonder.” Auggie’s sister Via, his friends from school and others all lend their voices to tell Auggie’s story at a crucial moment in his life: when he goes to school for the first time. Middle school. I bet a lot of you cringed when you read that. Can you imagine? Auggie has no hope of fitting in with a face that immediately sets him apart. He’s quickly labeled with several vicious nicknames like Freddy Krueger, Freak and Lizard-Face.

But here’s the thing. Auggie is cool. He’s funny, he’s smart, he’s clever. He has one of those personalities that makes him endearing. He’s one of those people you just want to befriend. But because of his face, no one will touch him. I don’t just mean that figuratively.

At one point in the book, there’s a game called “the plague,” wherein if anyone touches Auggie they “catch a disease.” Even though this book is now six years old, the bullying that Auggie and his friends face rings as true in 2018 as it did in 2012. While many middle-grade books cover the upheaval of transitioning from elementary to middle school, bullying and the potential for all-out cruelty of kids that age is glossed over. Palacio shines a bright light into the dark corners of the middle-school experience of many children, but she does it in a way that never leaves the reader without hope.

So far “Wonder” sounds pretty grim, but throughout Auggie’s struggles to fit in, make friends and pursue life as a normal kid, Palacio weaves in unforgettable characters and utterly quotable lines and ultimately creates a message that will resonate with everyone: “When given the choice between being right or being kind. Choose kind.”

The library couldn’t have picked a better Read Across Lawrence book. There’s so much to dissect, discuss and dig through. It resonated with 27-year-old me, and it resonates with kids as well (I have rarely seen it on the shelf in my two-year tenure at the library). “Wonder” may not have made me cry, but that doesn’t mean I didn’t feel different after reading it. Palacio’s fantastic novel is moving, and I bet you’ll be moved too.

Grab a copy on Jan. 15 at 1 p.m. in the library auditorium and read along with us! Look for Read Across Lawrence programming throughout February and March as well. Since the book is so quotable, I started with one, so I might as well end the same way. Here’s one of my favorites:

“The real, real, real, real truth is: I missed seeing your face, Auggie. I know you don’t always love it, but you have to understand. I love it. I love this face of yours, Auggie, completely and passionately.”

— Lauren Taylor is a youth services assistant at the Lawrence Public Library.