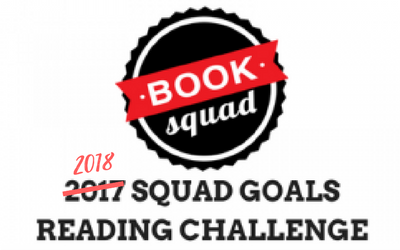 In 2017, the Lawrence Public Library’s Book Squad introduced the Squad Goals Reading Challenge, a collection of 13 prompts designed to get you reading more widely.

In 2018, by popular demand, we’re back with 13 new prompts that we hope will intrigue, delight and, yes, challenge you. We’ll have hard-copy forms available at the library by January, and the same “rules” apply as last year:

– Read along month-by-month, or read in
any order you like.
– Make a plan and stick with it, or
pick books on a whim.
– Start every book you finish, or
stop reading anything you aren’t
enjoying.

You do you, is what we’re saying.

Because I love making plans (and willfully discarding them), I’ve mapped out my choices below.

January: Read a thriller — I’m going with Tiffany Jackson’s “Allegedly,” about a black teenager, Mary, who was convicted of murdering a white baby when Mary was just eight years old. I’ve heard this psychological thriller is great on audiobook, so I’ll plan to listen to this one.

March: Read a book with a character’s name in the title — After watching the very charming “Spider-Man: Homecoming” recently, I decided to delve deeper into Spider-Man, a hero who usually doesn’t interest me much. I’ve heard great things about “Miles Morales,” author Jason Reynolds’ young adult novel about the current Spider-Man.

April: Read a book about a mythical creature — For many years, I summed up my taste in fiction as “no dragons” — then along came Naomi Novik’s “Temeraire” series. For this prompt, I’ll indulge my newfound love of dragons with Jo Walton’s “Tooth and Claw,” about the power struggles in an influential dragon family after the death of its patriarch.

May: Read a book about nature — I read more poetry in 2017 than I have in years. I want to build on that progress, so I’ll read through the anthology “Black Nature: Four Centuries of African American Nature Poetry.”

June: Read a book with an LGBTQ+ protagonist — Spoiler alert! I’ve been meaning to try Adam Silvera’s work for a while now, so I plan to weep my way through his 2017 release “They Both Die at the End,” about two young men who receive notice from the Death-Cast notification system that they’ve got one day left to live.

July: Read a nonfiction book on a topic you don’t know much about — In college, I took a course that explored the connections between math and music — and was shocked to find that I was more interested in the math than the music. I’ll brush up my knowledge with “Everything and More: A Compact History of Infinity,” David Foster Wallace’s nonfiction deep-dive into the mathematical concept of infinity. 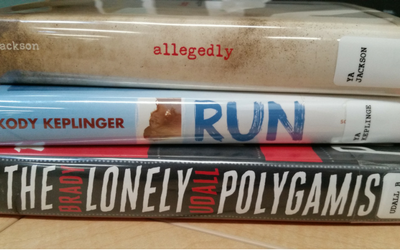 August: Read an urban fiction book — I devoured Aya de León’s fun, thought-provoking heist romance “Uptown Thief” this year, and I’ve been saving its sequel, “The Boss,” so that I wouldn’t tear through the series too fast. I’m especially excited because it moves one of my favorite secondary characters front and center.

September: Read an anthology of short stories by multiple authors — I mostly missed the “Hamilton” craze (I still haven’t listened to the entire show), but I can’t wait to read “Hamilton’s Battalion: A Trio of Romances,” which brings together stories set at the Battle of Yorktown, written by three of the best romance novelists currently working (Alyssa Cole, Courtney Milan and Rose Lerner).

October: Read a book by an author with a disability — I’m going with Kody Keplinger’s “Run,” a young adult novel about the friendship between wild child Bo and rule-follower Agnes. Keplinger has written several really good young adult novels, but this is the first one where she includes a blind main character. (Keplinger is blind herself, so this one would also work for the #ownvoices prompt.)

November: Read a true crime book or fiction based on a true crime — Talk about stranger than fiction: Did you know that prolific mystery writer Anne Perry was convicted for participating in the murder of her best friend’s mother in the 1950s? If that doesn’t make you want to read Peter Graham’s “Anne Perry and the Murder of the Century” with me, I don’t know what will.

December: Read a book set in the future — I was debating between two books for this prompt, and then I saw that my fellow Book Squad-ers Kate and Kimberly had both given one of them five stars. I’m reading “Orleans,” by Sherri L. Smith, set in a quarantined, almost-abandoned Gulf Coast.

Anytime: Read a book you’ve been meaning to finish – Whatever else 2018 may hold, I can guarantee it will hold this: it will be the year I finally finish Bradley Udall’s “The Lonely Polygamist,” which I have thoroughly enjoyed every time I’ve started it, and which has nevertheless been hanging out on my to-be-read list since 2010.

So that’s my very tentative plan for the 2018 Squad Goals challenge. I’m looking forward to reading along with you.

-Meredith Wiggins is a readers’ services assistant at the Lawrence Public Library.