Suspect arrested after man is found shot in Lawrence park 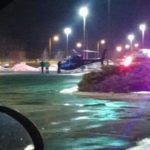 A Life Star air ambulance standing by in the 6th Street Hy-Vee parking lot to transport the shooting victim. Photo provided by Evan Elzea, @evanelzea on Twitter. Used with permission.

Police are investigating after a man was found shot in a vehicle early Friday.

Lawrence Police were called to L.R. “Dad” Perry Park, 1200 Monterey Way, by the shooting victim just before 2:15 a.m.. Officers located the victim inside his vehicle in the north parking lot of the park, near the intersection of Harvard Road and Lakecrest Road.

Medics reported the victim’s injuries to be critical and a LifeStar helicopter was dispatched to respond. Fire Medical personnel prepared a landing zone for the helicopter in the Hy-Vee parking lot, near W. 6th Street & Monterey Way.

The victim was alert and able to tell police the name of the man who allegedly shot him. Officers were familiar with alleged suspect and a vehicle he is known to drive. That vehicle was located at the Kwik Shop near 23rd & Harper just before 3 a.m.. The suspect was taken into custody without incident.

No other details were immediately available.