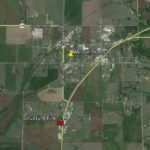 Google Earth image of the area.

Firefighters from Meriden and at least two nearby townships battled a structure fire just off of Kansas Highway 4 on the outskirts of town early Saturday.

Fire crews arrived to report flames through the roof of the large machine shop building. The address given by firefighters is 7127 K-4, which shows to be Quality Custom Cabinets.

There were several water tankers on the scene supplying water to fight the fire. Crews were unable to enter the building to attack the fire, instead they used at least one aerial ladder to spray water through the building’s roof.

Incident command declared the fire to be under control around 3:30 a.m..

Meriden is about 10 miles northeast of Topeka or 17 miles northwest of Lawrence.

Check back with this blog post for updates as they become available.