Bill Self on KU’s preseason No. 1 hype: ‘I’d rather be there than not there’ 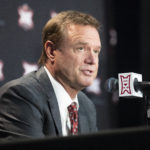 Kansas head coach Bill Self addresses media members at the beginning of his segment during Big 12 Media Day on Wednesday, Oct. 24, 2018 at Sprint Center.

A day before his No. 1-ranked Kansas basketball team’s second and final preseason exhibition, coach Bill Self was asked if he’d prefer the Jayhawks were flying under the radar entering the season.

“I’d prefer to have good enough players to be ranked number one and not be ranked there,” Self replied, while fielding questions inside Allen Fieldhouse on Wednesday afternoon.

“That’s probably the perfect scenario, but that doesn’t happen like that. I’d rather be there than not there. And the fact that if we don’t play to it early on, I think that’s OK, too, because I don’t know what a preseason ranking is supposed to be — who the best team is on November 5, or who is projected to be the best team over time,” Self said.

“I do believe that we’ll be OK early and hopefully pretty good,” the KU coach added. “But I know we can be very good after we get a little experience under our belt.”

Self addressed the preseason expectations surrounding his team and many other topics, including facing a former assistant, Washburn head coach Brett Ballard.