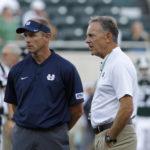 “Not Gonna Fool Me Nellie,” as he likes to call himself, has the most elaborate twitch I’ve ever seen, and the simplest approach to sports betting.

First, the twitch: He looks left, then straight ahead, then right, then behind. He repeats this constantly throughout the day, so he seldom looks at you when he’s talking. All day. Never stops.

His wagering system: If it looks too good to be true, that means it’s too good to be true. Stay away. If all the factors point to one team, go the other way, insists “Not Gonna Fool Me Nellie.” He plays what are known as reverse locks and he plays nothing else. He insists it works, and so far I have resisted the temptation to ask him why he never spends any of his winnings on updating his 50-year-old wardrobe, why he drives a jalopy and why he every day makes the same meal for breakfast, lunch and dinner: mac and cheese out of the box.

A look at a few Saturday games with point spreads from Vegasinsider.com as of Friday night:

1 – (Best bet) — Utah State -15 at Wyoming: If you’re in the camp that adheres to never betting against streaks, well, there’s a beauty on the board for you this week.

Utah State is having a season that has restored Matt Wells’ status as a hot, young coach. It had been fading, thanks to a three-season run of 15-23, after he went 19-9 in his first two seasons.

When that sort of dip happens, the mind naturally goes to, “He can win with somebody else’s recruits, but he can’t recruit.”

The seventh-year coach is winning and winning big with his own recruits this season.

The Aggies rank second in the nation with 51.7 points per game and 48th with 23.8 points allowed.

A native of Sallisaw, Okla., Wells employs his brother Luke as an assistant coach in charge of tight ends and inside receivers.

The Aggies’ lone loss this season came in the opener to Michigan State, and they are unbeaten vs. the spread, often winning on that front by a landslide.

Michigan State was favored by 29 points and won by seven. The Aggies were favored by 21.5 vs. New Mexico State and won 60-13.

The Aggies were 47-point favorites vs. Tennessee Tech and hammered the Golden Eagles, 73-12. Utah State traveled to Provo for a Pick’Em game and blasted the Cougars, 45-20.

Meanwhile, Wyoming’s offense is gasping for air in Laramie and it can’t be the altitude. The Cowboys must be used to that by now. They have gone six consecutive games without scoring as many as 20 points, which is why they’ve lost six in a row against the spread.

This one’s sitting right there for the plucking.

2 — North Texas +1.5 at UAB: Losing star running back Loren Easly to a season-ending knee injury after five games was a big hit for UNT, but DeAndre Torrey has softened the blow. He ran for 95 yards and three touchdowns in last week’s 30-7 slaughter of Southern Miss, which was a 7-point underdog.

3 — Oklahoma -8 at TCU: Oklahoma is coming off a loss to Texas and has had two weeks to prepare for the Horned Frogs. Those are not the circumstances under which you want to play the Sooners, even if you did last play on a Thursday and suffered an upset loss yourself.