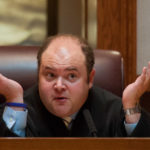 Last year, national media outlets included University of Kansas alumnus David Stras on a shortlist of potential nominees to the U.S. Supreme Court. That did not happen — Neil M. Gorsuch has since been nominated and confirmed to the vacancy.

However, Stras is on a new list of Trump nominees.

The White House this week announced its third wave of federal judicial appointments, pending confirmation. Stras, who’s currently a justice on the Minnesota Supreme Court, was appointed to serve as a circuit judge on the U.S. Court of Appeals for the Eighth Circuit.

Stras received his bachelor’s degree, master’s of business administration and law degree from KU. While at KU School of Law, Stras was editor-in-chief of the Criminal Procedure Edition of the Kansas Law Review and earned a number of academic honors, including election to the Order of the Coif, according to his Minnesota Judicial Branch bio.

Stras, 42, is described as “a conservative who defers to the law as its authors intended — not ideology — to shape decisions,” according to a story in the Minneanapolis Star-Tribune (written, incidentally, by former Journal-World reporter Stephen Montemayor). Stras, who grew up in Wichita, is a longtime Federalist Society member, a former University of Minnesota faculty member and also the grandson of a Holocaust survivor. He is believed to be only the second Jewish appellate judge in the Eighth Circuit.