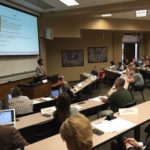 The past month has brought the annual changing of the guard for the various university governance bodies at the University of Kansas.

As I’ve already reported, students in mid-April elected juniors Mady Womack and Mattie Carter as student body president and vice president, respectively. In that role, the pair represent the student body and also are at the helm of KU’s Student Senate.

Since then the University Senate, Faculty Senate and Staff Senate also have elected new leaders for the 2017-18 academic year. The presidents will be:

At Tuesday’s joint meeting of the University Senate and Faculty Senate executive committees, outgoing Faculty Senate President Pam Keller cited diversity and inclusion as one area university governance made strides in during 2016-17, in part through an ad hoc committee. She said making “structural changes” was important, even though it’s a slow process that governance will need to continue in the coming years.

“Making small changes or targeting something specific is actually, I think, more valuable than just talking about the issue broadly,” Keller said.

Keller said other areas she hoped future governance leaders would continue working on are combatting sexual assault and the implementation of campus concealed carry.

All university and faculty senate representatives will be updated later at governance.ku.edu. The Staff Senate website is staffsenate.ku.edu.