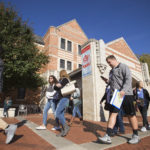 At the end of the day, the Kansas Union referendum that supporters have campaigned for since last fall will remain on the ballot for this week’s University of Kansas student elections. Students are to vote Wednesday and Thursday on whether to authorize an additional $50 per semester required campus fee to fund a $45 million renovation of the Union.

But the referendum briefly appeared in danger of being yanked from the ballot last week, after the opposition filed violations complaints with the KU Student Senate Elections Commission. Redo Your U may still (at least as of this writing…) be in danger of being forced to take down campaign materials in the final days before the vote.

The Redo Your U campaign is led by a student committee and sponsored by the KU Memorial Union, as stated at redoyouru.ku.edu (notably, an official university domain). Redo Your U has been campaigning for the referendum since October, through social media posts, meetings and printed campaign materials. Redo Your U also has offered prizes — such as food, drawings for event tickets and such — as part of its campaign.

None of that is a secret. In fact, quite the opposite — Redo Your U was publicly promoting all of it, and has continued to.

But KU Against Rising Tuition, a student organization campaigning against the Union fee and renovation, filed a complaint with the Student Senate Elections Commission accusing Redo Your U of bribery and early campaigning, in violation of the election code.

KU Against Rising Tuition president Lev Comolli, a Lawrence sophomore, contended that the rule stating coalitions can’t campaign until March 6 should apply to ballot questions, too, and that the Union referendum should be axed for its violations. He said the Union corporation — through Redo Your U — has used “misleading,” “malicious” and “greasy” tactics to get the measure passed.

“It’s been a marketing campaign since the very start,” Comolli said. “They should have been disqualified in the first place.”

Recall from my story published Sunday that while a student referendum for a building project is not unprecedented, KU hasn’t had one for almost 15 years, so it’s a rare thing for the Elections Commission to be dealing with. Redo Your U representatives told the commission during Wednesday night’s hearing that they believed they were free to begin campaigning in October, when the Student Senate approved putting the question on the ballot, said Elections Commission chair Garrett Farlow, a Tecumseh senior.

Farlow said the commission dismissed the bribery complaint but ruled that Redo Your U was responsible for early campaigning. However, he said, the elections code did not contain a rule that would allow the commission to remove a referendum from the ballot, “which is why we were unable to levy any sanctions.”

Instead, Farlow said, the commission ordered Redo Your U to cease campaigning and asked KU Against Rising Tuition to do the same (under threat of the commission not ratifying election results, whatever they may be). But before the Friday deadline to take all materials down, Redo Your U got a stay while awaiting an appeal, according to Redo Your U social media posts. I’m not sure what the outcome will be but I’ll leave you with this: If Redo Your U fliers, websites and social media accounts suddenly disappear, this is why. As for Comolli, he told me last week he did not intend to cease campaigning and was sticking with plans for an event Tuesday night — complete with a gift card drawing for attendees.

Meanwhile, there’s an unusually high number of people running for KU student body president this year — four. Meet those candidates in this recent Heard on the Hill post. If you can’t get enough university student politics, I suggest browsing each coalition’s social media accounts (links here), the University Daily Kansan’s election coverage (more play-by-play than mine, naturally). There’s even been debates and straw polls. I plan to report results from the Union referendum and the student body president and vice president races later this week.