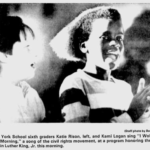 In nearly 30 years, much has changed since South Junior High students read poems about the life of Dr. Martin Luther King Jr. But Monday, as South students first did in 1987, young students presented those same poems to honor King on his namesake holiday.

In 1987 — a year after the first observance of the national holiday — Clenece Hills, then a teacher at South, came up with a program to celebrate it at the school. As part of the program, 18 students read a verse about the life of King that started with one of the 18 letters in his name, Hills explained on a podcast this week. After each student read, he or she lit a candle, so that once complete there were 18 candles burning to symbolize the contributions of King.

On Jan. 19, 1987, assemblies to celebrate the holiday were held at both New York Elementary School and South, according to an article from that day, King’s life inspires local pupils.

On Monday, 18 South Middle School students presented the same poems on the podcast, which airs on KLWN radio. Students read poems, which provide historical information about King and his involvement in the Civil Rights Movement. South drama teacher, Ericka Waller, directed the presentation with assistance from Mark Robinson, South vocal music teacher. You can listen to the podcast, which is about 40 minutes, on KLWN’s website.

The poems are published in the book “M Is for Marching” that was written by Hills. The school, which has long had a diverse student population, has held an annual celebration honoring King for nearly three decades before it became a districtwide event. This year, the Lawrence school district’s second annual MLK awards return to South on Thursday.

Thursday’s MLK event will include performances, a gallery and award ceremony. Performances include spoken word, dance by the Haskell Indian Nations University Alaskan Club and the Cordley Elementary Bell Choir.

The awards honor students, teachers, school staff and community members or groups for four awards: MLK Character, MLK Dreamers, MLK Heart of Service or MLK Champion of Equity. The community nominates individuals or groups for awards, and the finalists are below.