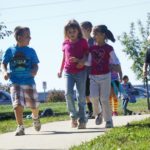 From left, Bennett Stammeyer, 6, Nevaeh Hogan, 6, and Natalie Caroll, 6, were part of the 300-student-strong marathon club at Langston Hughes Elementary School in Lawrence, shown in this file photo from October 2013.

The Lawrence school district’s marathon clubs are holding a meeting Thursday for those interested in volunteering. The coordinators are looking for more volunteers — no running required — as they prepare to kick off clubs for the spring semester at all 18 elementary and middle schools across the district.

The clubs keep track of how far students run or walk each session as they work their way toward the equivalent of a marathon (about 26 miles), and often give awards along the way or at the end of the semester.

Volunteers can be parents or just live in the neighborhood near schools, and duties include checking kids in and out or working as a course monitor. Courses are relatively short, consisting of several blocks surrounding each school. The monitors run (or walk) the route along with students or stand at turns and crossings to ensure safety, often offering encouragement as well.

Depending on the school, the clubs meet before or after school and on early-release Wednesdays. The process of tracking students’ distance will also be much easier going forward.

Previously, volunteers noted students’ progress with tallies on paper or marked runners’ hands as they passed by, but the clubs have received a modern update for the spring. Thanks to a grant, electronic wristbands will measure each runner’s distance per session, and club volunteers will be able to track their progress with a bar code scanning system.

The district’s Marathon Clubs page lists contact information for each school’s club for those who would like more details about a specific school’s club. The volunteer meeting will be Thursday from 4 p.m. to 5:30 p.m. at the district offices, 110 McDonald Drive.