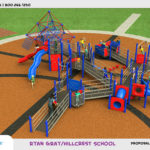 A rendering of the new Ryan Gray Playground for All Children at Hillcrest Elementary School, 1045 Hilltop Drive.

The bid for the project is about $247,000. In January, the Lawrence school board approved up to $300,000 for renovation of the playground, called the Ryan Gray Playground for All Children. The additional funds cover a 5 percent contingency to address unknown issues that could arise during construction. As part of the agreement, the school district will match up to $150,000 raised by the playground’s steering committee.

So far, the committee has raised $78,500 and hopes to increase that figure to at least $130,000 in coming weeks, said committee co-chair Janel Leitch. Along with other efforts, the committee is selling $50 and $100 bricks through May that donors can engrave with their name or other message. Donations can be made online.

The current accessible playground is more than 20 years old and the ground surface, surrounding landscaping and most of the specialized playground equipment will be replaced as part of the renovation. The playground was built in 1993 in honor of Ryan Gray, a former Hillcrest student who had disabilities and who died in 1990.

Construction of the playground is planned for this summer.

In other news and notes:

– Fourth-graders at Broken Arrow
Elementary will take a fieldtrip to
the Kansas Historical Society in
Topeka.

– First-graders at Hillcrest
Elementary will take a fieldtrip to
Shawnee Mission Town.

– Second-graders at New York
Elementary will take a fieldtrip to
Kaleidoscope in Kansas City, Mo.

– The second of three days for the
Sunflower Elementary book fair will be Thursday.

– Kindergartners and first-graders at
Woodlawn Elementary will perform their music program at 6:30 p.m.

– Sixth- and seventh-graders at
Liberty Memorial Central Middle School will perform their band
concert at 7 p.m.

– Sixth-graders at South Middle
School will take a fieldtrip to the
Baker Wetlands.

– The first of three days for the
Free State High School Black Box Theater Festival will begin at 7:30
p.m.