Plus: Watch for these other phone scams; AGs and phone companies attempt to curb robocalls 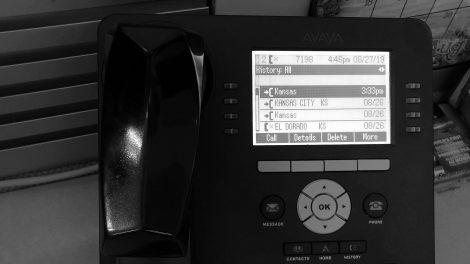 This Journal-World photo illustration shows several scam calls on the caller ID of a newsroom phone on Aug. 27, 2019.

The Douglas County Sheriff’s Office will never ask you for money to deal with legal issues or to avoid being arrested.

In a phone scam that has made the rounds in the past few years, both locally and nationally, someone who sounds rather official will call and inform you that there’s a warrant out for your arrest — oftentimes, the scammers say it’s because you’ve missed jury duty.

If it sounds familiar, that may be because the Journal-World has reported about the same or a similar scam previously — in November 2015, February 2017, December 2017 and March 2018, a quick Google search reveals. The scammers have claimed to be U.S. Marshals, county clerk’s office employees, sheriff’s office deputies and, at one point, a double whammy: “Sheriff Marshall.”

This time around, callers say they’re deputies with the Douglas County Sheriff’s Office. They are not.

Hethcoat said via email Tuesday that the department has received multiple calls from residents saying they’ve been told they need to pay a fine immediately to avoid arrest. That’s not true — the sheriff’s office will never ask people for money to deal with a legal issue or to avoid being arrested, she said.

If you have been a victim of a phone scam, you should contact the Kansas Attorney General’s office, Hethcoat said. Call 785-296-2215 or go online to ag.ks.gov/in-your-corner-kansas for help.

Local law enforcement will take a report to document when a victim has lost money in a scam, Hethcoat said, but those victims should contact the AG’s office, which specifically deals with these types of crimes.

Hethcoat didn’t mention jury duty specifically in connection with the recent calls to the sheriff’s office, but that is one that has been common over the years.

The Journal-World received a firsthand written account from a near-victim of an aggressive scam in which the caller told her that she had missed jury duty in a federal case. The caller reportedly told her that she could not hang up, her phone was being tracked and she could not tell anyone what was going on because there was a gag order involved in the trial.

She wrote that the caller told her she owed a bond of hundreds of dollars and she must report to the police station with prepaid financial cards immediately, because “that’s what the machine inside the police station takes.” She said she started to question what was going on at that point, but she was afraid.

Eventually, the woman wrote, she was able to flag down real officers who told her that it was a scam. She had no idea that police didn’t call people for warrants, she wrote, and she was concerned that she could lose her job and her professional license if she was arrested.

This is similar to calls the Journal-World reported on in 2017 — eventually, the caller likely would have asked the woman to provide the information from the prepaid cards. If you receive a call like that, you should hang up, don’t call back and don’t share any information, personal or otherwise.

On another note, one type of call that is hitting Lawrence phone lines could get you in trouble with just one word.

A person — or a surprisingly convincing robot — calls, gives their name and says they’re with an official-sounding organization, “calling on a recorded line. Can you hear me?” They speak quickly, and the gut reaction is to respond in the affirmative before asking them to repeat themselves.

Don’t do that, and don’t press any buttons “to speak to a live person” or to have your phone number removed from the list, if that option is presented. Don’t respond at all.

Best case scenario, that could lead to more robocalls, according to the Federal Trade Commission, once it’s clear that the phone number is active.

Worst case scenario, it could lead to something more nefarious. Once a scammer obtains a recording of you saying “Yes,” it can be manipulated to make it sound like you’re authorizing something that you’re not, such as a major purchase, according to the Better Business Bureau.

Also of note: Watch for the “one ring” phone scam. The Federal Communications Commission says if a number calls you, lets it ring once and hangs up, don’t call it back. The call could get rerouted and cost you a lot in international calling fees. The FCC recommends, rather, not to answer or return calls from numbers you don’t know.

Reader’s Digest version: Never pay anyone who calls you without checking on it first, never press any buttons at the request of a caller or a robot, don’t talk to strangers and warn your loved ones of the same.

The Kansas Attorney General’s office recently joined with the 49 other states and Washington, D.C., in an agreement with 12 of the major telecom companies in the U.S. to start taking action against robocalls.

According to an Aug. 22 news release from AG Derek Schmidt’s office, the companies — including Sprint, AT&T, Comcast, T-Mobile, Verizon and more — will implement call-blocking technology at no cost to customers, implement technology to authenticate that calls are coming from a valid source, investigate suspicious callers, work with law enforcement to trace the calls’ origins and more.

According to another news release this week, Schmidt also has asked the FCC to require telecom providers to implement technology to ensure calls come from secure, verified numbers rather than spoofed sources — calls that appear to come from numbers nearby and that share your area code to gain your trust, but could come from anywhere in the world.