Barnett questions fundraisers for Colyer; one to be held at home of Regents chairman

Republican Gov. Jeff Colyer on Wednesday declared himself the “front-runner” in the race for the GOP nomination, saying he is leading in the polls and that he has raised more money than any other candidate in the race.

His claim about leading in the polls might be arguable by some. One poll, conducted in February by the Kansas City-based firm Remington Research Group, showed Colyer with a 2-point lead over Secretary of State Kris Kobach, 23-21 percent, but that was within the poll’s 2.3-percentage point margin of error.

The poll was also taken when Wichita businessman Willis “Wink” Hartman and former Wichita lawmaker Mark Hutton were still in the race. Hutton has since dropped out and thrown his support behind Colyer, while Hartman has signed on as Kobach’s lieutenant governor running mate.

On the fundraising front, however, Colyer clearly has been the leading fundraiser, at least as of the end of December, when he reported raising just over $632,000 for his campaign. The next finance reports won’t be released until July 30, just ahead of the Aug. 7 primary.

Now, however, one of the other GOP candidates in the race, former state Sen. Jim Barnett, is making a long-shot bid to try to choke off some of Colyer’s revenue stream by calling attention to, and questioning, a couple of high-profile fundraisers that the Colyer campaign has scheduled next week.

According to emails sent out by the Colyer campaign, the fundraisers will feature Kansas City Chiefs head coach Andy Reid. And one of them, scheduled for Monday, June 4, will be held at the Wichita home of Kansas Board of Regents Chairman Dave Murfin. 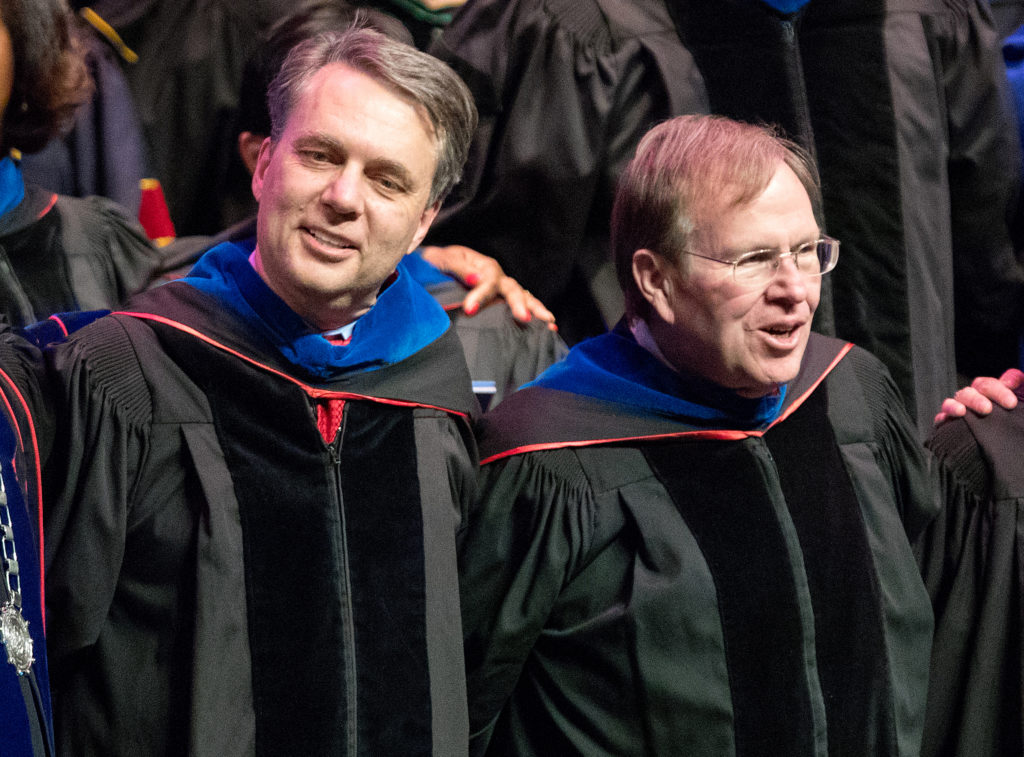 In this file photo from April 20, 2018, Kansas Gov. Jeff Colyer, left, and Dave Murfin, Chair of the Kansas Board of Regents, sing the KU alma mater during an installation ceremony for University of Kansas Chancellor Douglas Girod.

Last weekend, Barnett issued open letters to Reid and Murfin, urging them to withdraw their support for Colyer because he signed Senate Bill 284, which contained the so-called Adoption Protection Act, a law that Barnett describes as “one of the most discriminatory pieces of legislation in recent memory.”

That new law, among other things, says private, faith-based child placement agencies cannot be denied access to state programs or contracts solely because they discriminate against certain families based on their sincerely held religious beliefs.

Barnett has been struggling to find some breathing space in the race. He polled at 8 percent in the Remington Research poll, and reported raising $84,645 from outside sources at the end of 2017.

In a phone interview Wednesday, Barnett also questioned the propriety of a Board of Regents member hosting a political fundraiser for a candidate who may, if elected, decide whether or not to reappoint him to that board.

The Board of Regents is a 10-member body, all appointed by the governor, who supervise all of higher education in the state. The members serve without compensation.

A review of campaign finance data, however, shows that it has been normal in recent years for members to be financial contributors to, or to have strong ties to, the governor’s political party. Murfin, an oil company executive from Wichita, was a substantial supporter of former Gov. Sam Brownback, who appointed him to the Board of Regents in 2015. Records show that between 2013 and 2015, Murfin, his company and his wife, Janet Murfin, contributed $6,000 to Brownback’s campaigns, and that Murfin and his wife hosted two fundraisers for him.

Regent Bill Feuerborn, a former Democratic lawmaker from Garnett who was appointed to the board in 2014, also contributed $2,000 to Democrat Paul Davis’ gubernatorial campaign that year.

“Governor Colyer was pleased to support Catholic Charities and other faith based organizations as they worked to protect their ability to do adoptions in Kansas,” she said in one email. “While some may disagree, Governor Colyer believes we need more adoption options for expecting mothers considering adoption, not fewer.”

Fullmer also said there was nothing inappropriate about Murfin or any other Board of Regents member being involved in political campaigns.

“Dave is a respected businessman and supporter of charitable educational and political causes. We’re honored to have his support,” she said in a separate email.

Murfin did not immediately respond to an email request for comment.