Kobach releases internal poll showing him ahead in GOP primary 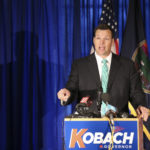 Kansas Secretary of State Kris Kobach announces his campaign for governor on Thursday, June 8, 2017 at the Thompson Barn in Lenexa, Kan.

TOPEKA — The Republican primary for governor in Kansas got a little more interesting over the weekend when Kris Kobach, the current secretary of state, released an internal poll showing him nine points ahead of incumbent Gov. Jeff Colyer, while Colyer picked up the endorsement of former U.S. Sen. Bob Dole.

Kobach and Colyer are generally seen as the two front-runners in the race, based on early fundraising and in other recent polls, but a lot will depend on who actually turns out to vote in the Aug. 7 primary.

Kobach’s survey was conducted by Louisiana-based JMC Analytics and Polling. The automated survey of 500 likely GOP primary voters was conducted July 24-26 and had a margin of error of plus or minus 4.4 percent. It included calls to both landline and cellphone users.

Based on that sample, the survey put Kobach in the lead with 34 percent, followed by Colyer at 25 percent, former state Sen. Jim Barnett at 11 percent and Insurance Commissioner Ken Selzer at 8 percent.

If true, that would be quite a change from earlier polls. In mid-May, a survey by the Kansas City-based Remington Research Group found the race a near dead heat, with Colyer ahead 23-21 percent.

But perhaps the most important finding was that with only a little more than a week remaining before the primary, 20 percent of those surveyed said they were still undecided.

In addition, about 5 percent of those in the survey were registered unaffiliated, a group of people who can, if they choose, take a Republican ballot at the election. Of those, Colyer was the clear front-runner with 27 percent, followed by Kobach and Barnett, who both came in at 8 percent.

Further, among younger voters, those 18-34 years of age, Barnett led the pack with 25 percent, followed by Colyer and Kobach with 19 percent each. But among those 65 and over, a group that made up half the sample, Kobach’s lead over Colyer was only 2 percentage points, 31-29 percent.

“My overall response is that in general the poll seems fine, but it is just one poll and more polls are always better, and there are some things to keep in mind about it,” Miller said in an email Saturday.

“First, it’s generally in line with previous polls showing Kobach and Colyer as the top two candidates, no one clearly crushing among voters, and a nice chunk of undecideds,” he said.

“Second, it’s an automated poll, though JMC typically does automated with both land line and cellphones,” Miller added. “The issue with automated polls is that they tend to draw in respondents who are a bit more politically engaged, stand pat in their political orientations, and likely to vote. The skew is not huge on average, so I wouldn’t read that as saying that the poll isn’t capturing a big chunk of less engaged, less ideological Barnett supporters.”

The Colyer campaign said it wasn’t especially concerned about the poll, noting that JMC also did polling in the 2017 special U.S. Senate election in Alabama. In a poll released about two weeks before that Dec. 12 election, JMC showed Republican Judge Roy Moore up 5 points over Democrat Doug Jones, who ended up winning the race, 50-48 percent.

“They have quite a track record of providing losing candidates with bad polling,” Colyer spokesman Kendall Marr said in an email.