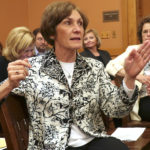 Wagle, of Wichita, issued a statement Wednesday calling Bollier’s endorsements “embarrassing” and noting that she was being removed as vice chair of the Public Health and Welfare Committee.

“While we respect differing opinions in our caucus, it is unacceptable to betray members of your own party by publicly endorsing leftist Democrats,” Wagle said in the statement. “Senator Bollier has lost credibility within our caucus which makes it impossible for her to function in a leadership role.”

Wagle’s statement came out just hours after Democrat Tom Niermann, who is running in the 3rd District congressional race, announced that Bollier would be among several elected officials who will be out walking door to door campaigning for him later this week.

Niermann, who is considered a centrist Democrat endorsed by the Mainstream Coalition, is running in a hotly contested Democratic primary with Brent Welder, who has the endorsement of Vermont Sen. Bernie Sanders, and Sharice Davids, who has the endorsement of the abortion rights PAC EMILY’s List. The winner of that primary will go on to face incumbent Rep. Kevin Yoder in the general election.

Bollier has also stated publicly that she will support Democratic Sen. Laura Kelly, of Topeka, in the governor’s race if Kelly is the party’s nominee, but she has not made an endorsement in the Democratic primary, according to a spokeswoman for Kelly’s campaign.

Bollier, a retired physician, is considered a moderate Republican who supports expanding Medicaid under the Affordable Care Act and who also supports abortion rights.

Responding in a phone interview, Bollier confirmed that she had told the Wichita Eagle that she would vote for Kelly if Kelly wins the nomination, but she did not consider that a formal endorsement. She also confirmed that she will be walking door to door for Niermann on Friday.

“I’m not trying to make things more difficult for anyone. I just think he would be a great congressman for us,” she said.

Of her removal from the vice chairmanship of the Public Health and Welfare Committee, Bollier said she was not bothered.

“I will continue to work hard for my constituents,” she said.