How the abortion issue threatens to divide Democrats 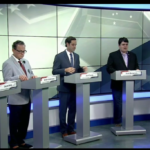 photo by: Screenshot from WIBW-TV, Topeka

TOPEKA — Although abortion has been a lightning-rod issue that has been dividing the Kansas Republican Party for decades, in the 2018 primaries, it’s an issue that threatens to divide Kansas Democrats, as well.

In the primary race for governor, state Sen. Laura Kelly has been blasting one of her main rivals, former agriculture secretary and former Rep. Joshua Svaty, over his record in the Legislature voting in favor of abortion restrictions, pointing out that he voted 11 times in favor of restrictions on abortion and four times to override former Gov. Kathleen Sebelius’ vetoes of abortion bills.

Svaty, meanwhile, has vowed that if elected, he would veto any additional restrictions, while arguing back that Kelly has taken a number of conservative positions herself, such as co-sponsoring the 2015 “constitutional carry” bill that allows people to carry concealed firearms without a permit, and the 2011 bill championed by Republican Secretary of State Kris Kobach that required people to show proof of U.S. citizenship in order to register to vote — a law that was recently struck down by a federal judge as unconstitutional and a violation of federal voter registration laws.

Kelly, of Topeka, has served in the Legislature since 2005. Svaty, who also now lives in Topeka but is originally from Ellsworth County, served in the House from 2003 until 2009, when he stepped down to take the agriculture secretary job under then-Gov. Mark Parkinson.

The rift widened Wednesday evening during a televised forum in which Svaty vowed to be a strong defender of abortion rights without mentioning his voting record, while Kelly accused Svaty of trying to gloss over his record.

“I think it’s important that we not mislead voters on where we stand on certain issues,” she said.

It gained even more visibility Thursday when a spokeswoman for EMILY’s List, a national political action committee that supports abortion rights and has endorsed Kelly, issued its own statement criticizing Svaty.

“Now more than ever, Kansans need a governor who will protect a woman’s constitutional right to choose,” Christina Reynolds, vice president of communications at EMILY’s List, said in the statement.

In truth, both candidates were elected from relatively conservative districts — Svaty was from western Kansas, and Kelly’s central Topeka district also includes portions of Republican-leaning Pottawatomie and Wabaunsee counties — and so both have had to walk a tight line in order not to alienate too many of their voters.

But now that they are competing for the Democratic nomination for governor — Democrats haven’t had a truly contested gubernatorial primary for governor since 1996 — both have to campaign statewide to the Democratic Party’s traditional base, which has made for some awkward debate moments.

“I’m really kind of surprised because, while some of these differences are significant, Svaty and Kelly really aren’t that different on their voting records, except on abortion rights, and even there, Svaty has said he’s not necessarily wanting any more restrictions on abortion,” Emporia State University political science professor Michael Smith said in a phone interview.

Divisions within the Democratic Party nationally are nothing new. In 1980, then-President Jimmy Carter was challenged from the left by the more liberal Sen. Ted Kennedy. And in 2016, the rivalry between Hillary Clinton and the more liberal Sen. Bernie Sanders created animosities that linger today and that have been playing out in Democratic primaries across the country, including the 3rd District congressional race in the Kansas City area.

In Kansas, though, Democrats have largely tried to present a unified face, even though there have always been a number of Democrats who vote in favor of abortion restrictions and expanding gun rights. That’s because for years, they have been such a minority in the Legislature that they could not afford to divide themselves.

But Smith said that in 2018, the abortion issue in particular is important to Democrats nationally.

“Clearly, abortion rights have become a defining issue,” he said. “The anger about the way President Trump has been accused of treating women, and the ‘Me Too’ movement, probably deepened that rift. And now, of course, we have the Justice (Anthony) Kennedy retirement, which I think deepens it further, and it’s become a litmus test.”

Kelly said in an interview Thursday that she does not believe the issue will fracture the state party.

“I think that Democrats traditionally are strong supporters of women’s right to make their own health care choices, so I don’t see this being a splinter issue at all,” Kelly said.

Svaty, meanwhile, said he does see the party being divided, but he said he doesn’t think it’s about the abortion issue.

“I do think there’s division here, but I think that division is driven largely by the rank-and-file members of the Democratic Party that are tired of losing races over and over again and having a party establishment tell them who their candidate is going to be, so everyone spends all their time and energy helping that candidate and they still just lose a race,” Svaty said.