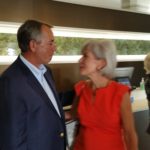 One of the more interesting side notes to the Kansas Democratic Party’s “Demofest” convention in Wichita this past weekend was the surprise sighting of a Republican political celebrity, former U.S. House Speaker John Boehner.

In what appeared to be a bizarre coincidence, both he and former Kansas Gov. Kathleen Sebelius were spotted checking into the convention hotel at the same time Saturday evening. What’s more, it turns out the two of them actually grew up together in the same area of southern Ohio, which Boehner represented in the House from 1991 through 2015.

Boehner, of course, wasn’t there to crash the Democrats’ festivities. In a casual conversation over coffee the next morning, he explained that he’s traveling across the country in a motor coach stumping on behalf of Republican congressional candidates, and he was in Kansas for a fundraiser to benefit 1st District Rep. Roger Marshall, of Great Bend.

A spokesman for Sebelius said Monday that it was a completely unexpected coincidence. Neither knew that the other would be there.

But what was especially noteworthy about the encounter was how genial and gracious he was to all the Kansas Democrats who were excited to see him and couldn’t wait to shake his hand or have a selfie taken with him.

And all of this occurred on the same weekend that marked the passing of U.S. Sen. John McCain, who died of brain cancer that same Saturday, prompting many to wonder whether the same kind of cross-party respect and cooperation for which McCain was so well known hadn’t passed from this world with him.

Boehner was arguably a victim of the very hardline, uncompromising partisanship that seems to pervade Washington these days. He became speaker following the 2010 elections, which was then-President Barack Obama’s first midterm election, when Republicans gained 64 seats and won control of the House.

Boehner was seen as part of the regular Republican establishment at the time, but the GOP victories in 2010 were driven largely by the rise of the so-called “tea party” movement, whose members rejected the establishment way of doing politics and took more hardline positions on things such as taxes, growth in government and, most notably, Obamacare.

That made things difficult for Boehner when it came time to negotiate with the White House on virtually anything. After a while it became clear that the Republican speaker could not speak or negotiate on behalf of a large number of Republican House members.

One of the tea party members most critical of Boehner, of course, was former Kansas 1st District Rep. Tim Huelskamp. After Huelskamp voted against a number of leadership-backed bills in 2012, including a farm bill and a budget plan, Boehner removed Huelskamp from his seat on the House Agriculture Committee as part of a “purge” of disloyal House Republicans.

But that only stiffened the hardliners’ opposition to Boehner. In September 2015, after a failed attempt to remove him as speaker, Boehner announced that he would step down as speaker and resign his House seat at the end of the following month.

But Boehner’s punishment of Huelskamp turned out to be a major blow for the Kansas congressman because it marked the first time in several decades that no Kansan would sit on the Agriculture Committee, something Huelskamp’s own constituents could not abide.

Huelskamp ended up losing his bid for re-election in 2016 when Marshall defeated him in the Republican primary that year. No surprise, then, that Boehner was in Kansas last weekend stumping for Marshall.

But none of that seemed to be on the minds of Kansas Democrats when they saw him walking around the same hotel where they were holding a convention. They seemed genuinely excited to see him. Many expressed their personal affection for him and thanked him for his service, perhaps showing that John McCain’s style of bipartisanship isn’t dead after all.