TOPEKA – After a primary election campaign that has lasted more than a year for some candidates, polls finally opened this morning and all candidates had left to do was sit back and see whether their strategy worked.

That’s especially true in the Republican primary for governor, where the top three or four candidates all ran vastly different campaigns.

Among the top two, at least according to the few polls that were released, incumbent Gov. Jeff Colyer tried to use the power of incumbency, stressing how he can “get things done,” even though he’s only actually held the office since January. And Secretary of State Kris Kobach, on the other hand, ran a hard-right, pro-Trump campaign that was boosted at the last minute by an endorsement from President Donald Trump.

Meanwhile, Insurance Commissioner Ken Selzer appeared to struggle to get in the spotlight, insisting that he can be just as conservative as anyone, while Topeka physician and former state Sen. Jim Barnett tried running from the left, hoping the three others would split the conservative vote, allowing him to walk away with support from moderates.

The big question on most people’s minds Tuesday was how much of an impact President Trump’s last-minute endorsement of Kobach would have on the race.

According to a tally kept by the website Ballotpedia.org, Trump was one-for-four in supporting winning candidates in the 2017 special elections. Most notably in Alabama, which had a special election to fill now-Attorney General Jeff Sessions’ seat, Republican voters there rejected his endorsement of Luther Strange and instead nominated controversial Judge Roy Moore. Then, when Trump endorsed Moore in the general elections, Alabama voters chose Demcrat Doug Jones.

So far in the 2018 primaries, though, Trump has had better luck. Notably, he endorsed a conservative challenger who ended up defeating U.S. Rep. Mark Sanford, R-S.C., in a June primary. And in a July 1 primary, his endorsement was credited with helping South Carolina Gov. Henry McMaster survive a surprisingly tough primary. The Washington Post reports that since June, the 11 candidates Trump has endorsed in Republican primaries all have won.

But how much weight will he carry in a Kansas primary?

“I don’t think it hurts Kobach at all,” he said. Very few Republicans either don’t like Donald Trump or disapprove of the job he’s doing. That’s quite clear from the national polling. If you are a Republican who’s not keen on Trump, you’re probably already voting for Jim Barnett or holding your nose and voting for Jeff Colyer, I would imagine.”

All in all, Miller said he thinks Trump’s endorsement will, at best, be a small net positive for Kobach. But in a close race, that could be enough to tip the balance.

So what does Colyer need to have happen to pull out a win? Two things, according to Miller.

“One, I think he needs to have undecided voters break towards him quite substantially. He’s anywhere from 10 points behind Kobach to statistically tied with him. So he would need a lot of the undecided voters,” Miller said. “But he would also need a fair number of Barnett and Selzer voters to decide that voting for Colyer is strategically smarter if they don’t like Kobach.”

Colyer has, in fact, aired TV ads urging Republican primary voters to do just that, saying that a vote for either Barnett or Selzer would only help ensure Kobach wins the nomination. But Miller said that message came late in the campaign, and it’s difficult to predict how much of an impact it will have. 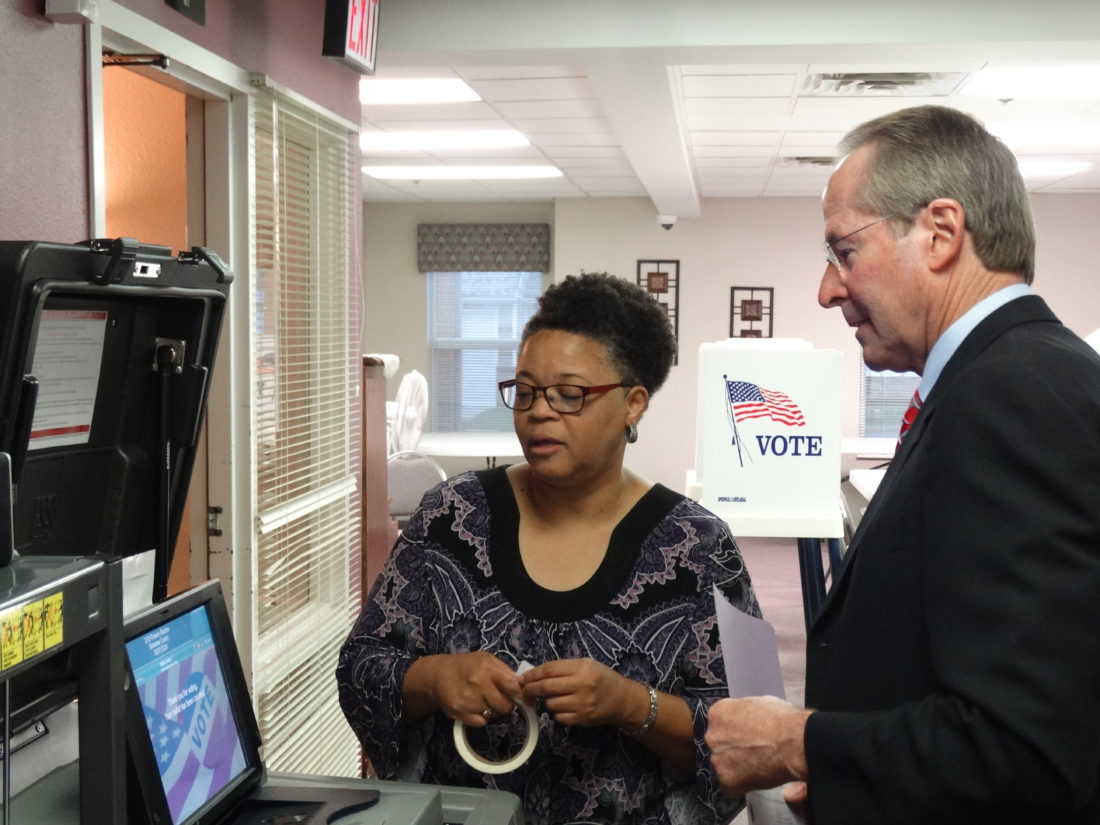 Republican gubernatorial candidate Jim Barnett, of Topeka, was among the first Election Day voters to cast his ballot shortly after 7 a.m. Tuesday.

But Barnett, who was among the first to cast his ballot shortly after 7 a.m. in Topeka, was upbeat about his prospect.

As for Barnett, Miller said, the strategy of running as a moderate in a GOP primary was inherently risky.

“I know he’s labeled a moderate, but I think he’s run a decidedly liberal campaign in a Republican primary, and the audience for that is only so big,” he said.

“Maybe in his mind, running towards the left seemed strategically smart if you have a bunch of people running as conservatives as opponents,” he added. “But the bulk of Republican primary voters are over on the right, and you can afford to have those conservatives split and still beat a moderate to liberal candidate. Republican primary voters are not a normally distributed bell curve. It’s a right skew.”

Barnett himself was characteristically upbeat about his chances when he cast his ballot shortly after polls opened at 7 a.m. Tuesday. And he said he wasn’t concerned about Trump’s endorsement of Kobach.

“I would never discount the endorsement of the president, and so I congratulate the secretary for the endorsement,” Barnett said in an interview. “On the other hand, it could cut different ways because there are a lot of concerns about President Trump’s decisions related to tariffs and trade as we travel the state. Particularly out west, but across the state there are concerns, so it’s possible it could cut a negative way. I think for our particular campaign, it could actually be a positive.”

Also voting Tuesday morning was Democratic candidate Joshua Svaty, a former state representative and state secretary of agriculture. He is locked in what appears to be a three-way contest with state Sen. Laura Kelly, of Topeka, and former Wichita Mayor Carl Brewer. 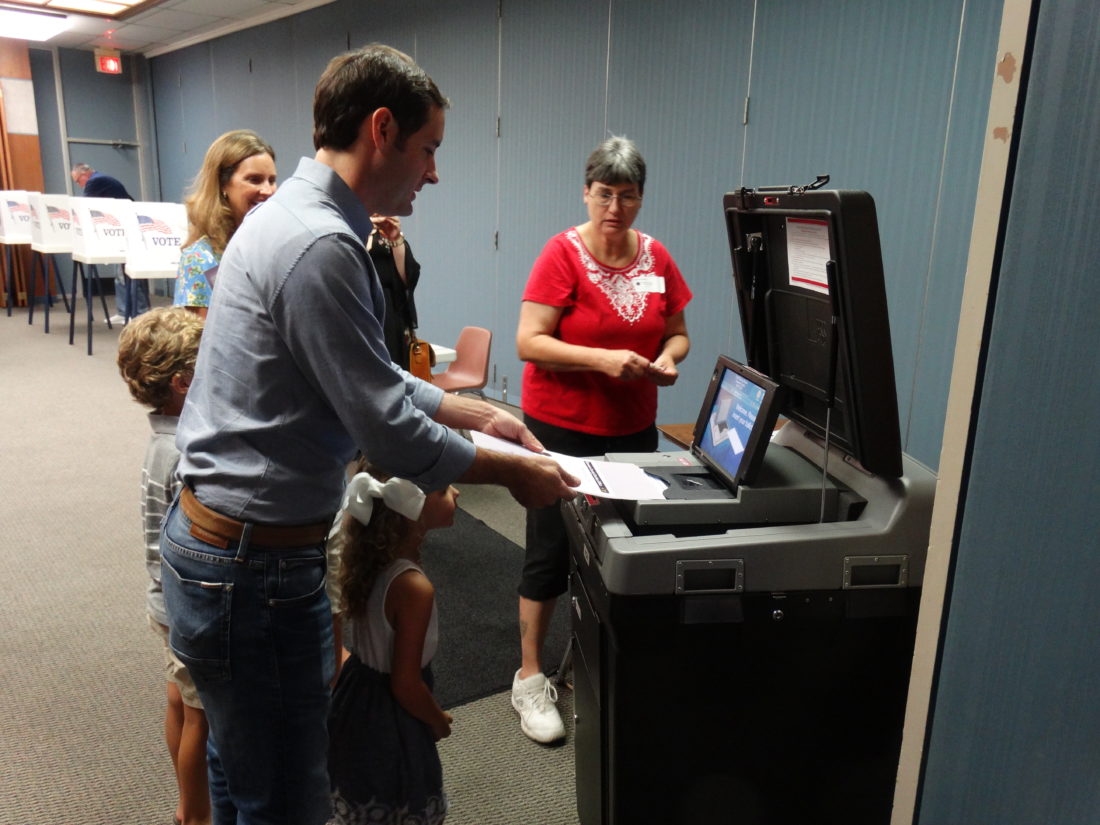 Democratic candidate for governor Joshua Svaty had his entire family in tow when he cast his ballot in Topeka Tuesday morning.

There has been virtually no public polling in the Democratic primary, but based on campaign fundraising, most observers are assuming Kelly to be the front-runner. But, like all candidates on Election Day, Svaty was upbeat about his chances, saying he felt “huge swing of momentum” in the final few days.

For Democrats, the question is how a Trump endorsement plays out in a general election. For his part, Svaty said he doesn’t think it will matter.

“I think had he endorsed or not endorsed, his presence in the race as going to be significant all through the fall,” he said. “That’s going to be part of the race for the next three months, for sure.”