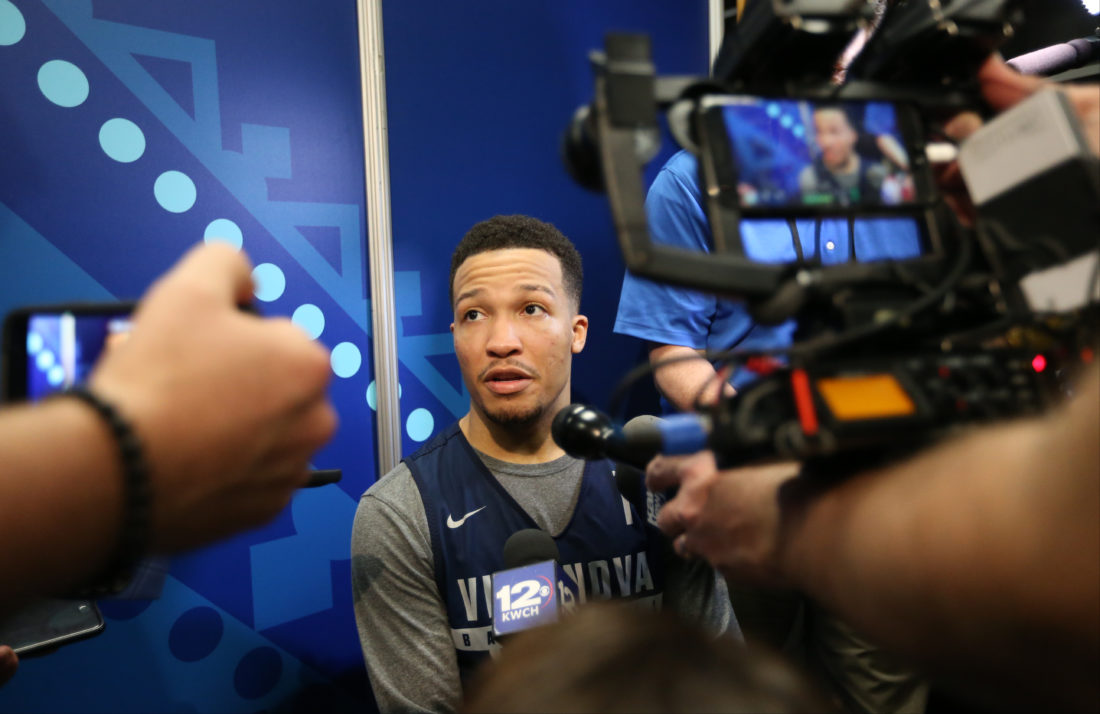 There’s plenty of similarities between Kansas and Villanova. Two All-American point guards. Two of the best offenses in the country. Two coaches who have won national titles. A pair of 1 seeds.

With a spot in the national championship game on the line, Villanova (34-4) will play its third straight Big 12 opponent at 7:49 p.m. Saturday (TV: TBS) at the Alamodome in San Antonio. The Wildcats advanced to the Final Four with double-digit victories over West Virginia and Texas Tech.

The Wildcats have three players who played in their 2016 national title victory: Jalen Brunson, Phil Booth and Mikal Bridges. Back in the Final Four, they will lean on those three players for their experience.

“To get this far, all the teams that are here, you have a laser focus, you have an ability to prepare for different opponents,” Villanova coach Jay Wright said. “If you don’t, someone’s going to catch you along the way. … This group reminds me of our group in ’16 in that way.”

Fun fact: The Wildcats are six 3-pointers shy of setting the NCAA single-season record for made 3s in a season. They’ve made 436 this season, only trailing VMI in 2007.

Series history: The series is tied 3-3, but Villanova has won the last two meetings. In the 2016 Elite Eight, the Wildcats won 64-59 on their way to an eventual national title. The two programs will begin a home-and-home series next year, playing Dec. 15, 2018 at Allen Fieldhouse. 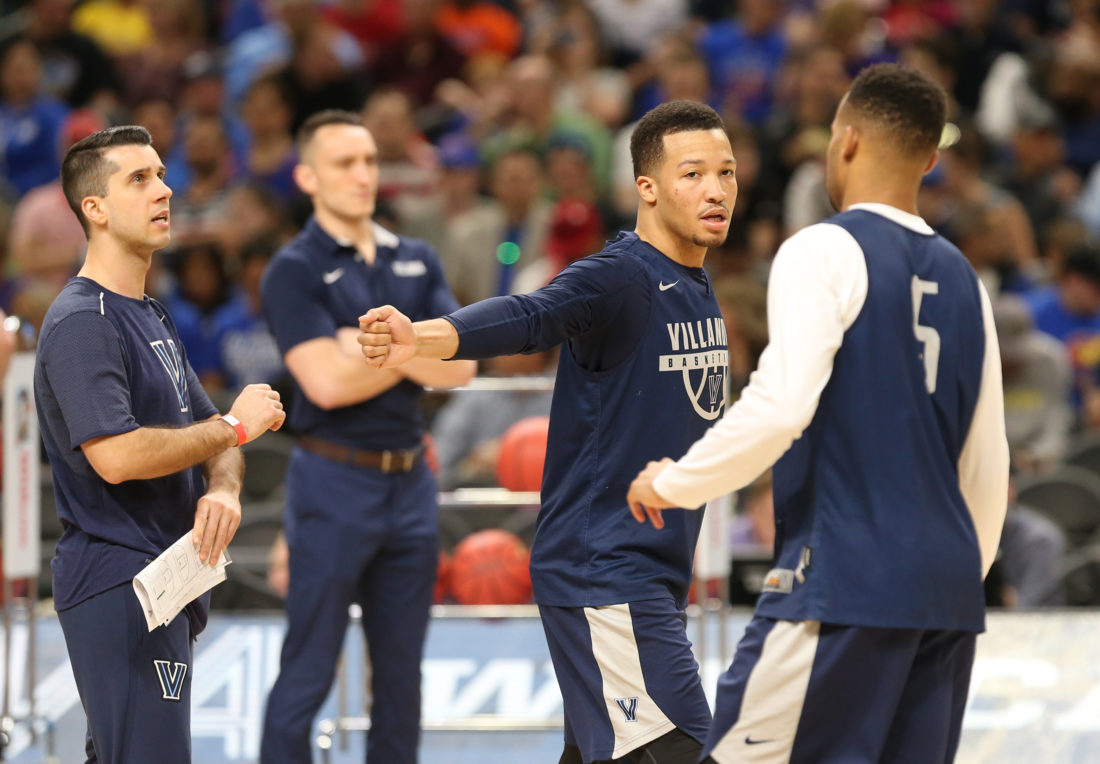 Named the national player of the year by the Associated Press, Brunson is near unstoppable on offense with his ability to shoot from anywhere on the floor and post up smaller guards. He’s averaging a team-best 19.2 points with 4.6 assists. From the 3-point line, he’s made 41.4 percent of his shots.

Brunson, from Lincolnshire, Ill., has scored in double figures in every game this season. According to hoop-math.com, Brunson shoots 71 percent around the rim, a very high mark for a guard, and 52 percent on mid-range jumpers. His dad, Rick, played basketball at Temple and spent nine seasons in the NBA, while his mom played volleyball at Temple.

• “He’s a machine. His work ethic is crazy,” teammate Eric Paschall said. “This is when I knew Jalen was like a robot: It was earlier this year. We had a lift. We had a tough practice. We already shot. It was like 9 o’clock at night. I was tired. And he was like, ‘OK, I’m going to go shoot again.’ Seeing that inspires all of us.” 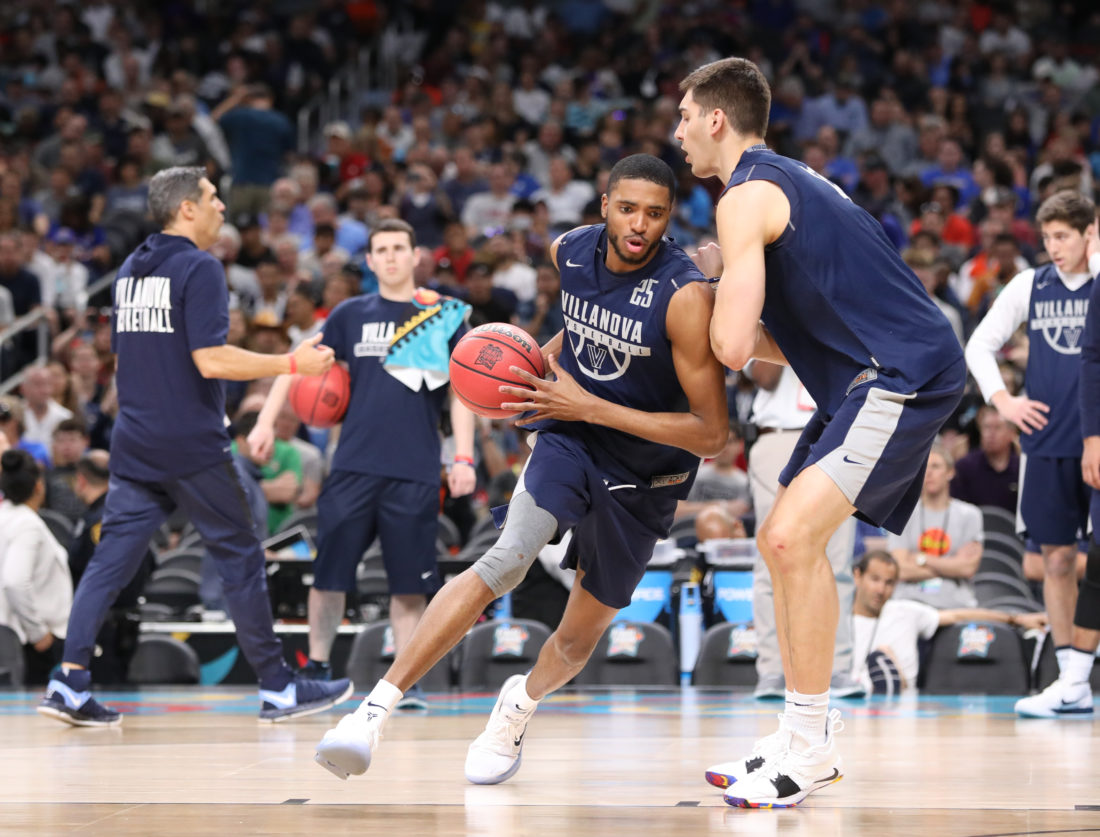 Villanova guard Mikal Bridges (25) drives against Villanova forward Dylan Painter (42) during a practice on Friday, March 30, 2018 at the Alamodome in San Antonio, Texas.

The top NBA Draft prospect in the Final Four, Bridges is averaging 17.8 points and 5.4 rebounds. He leads the Wildcats in steals (58) and free-throw percentage (84.8), while ranking second in blocks (41). With a 7-foot wingspan, Bridges shoots 43.6 percent from the 3-point arc.

In the NCAA Tournament: In four games, he’s totaled 64 points on 19 of 44 shooting with 20 rebounds and three blocks. 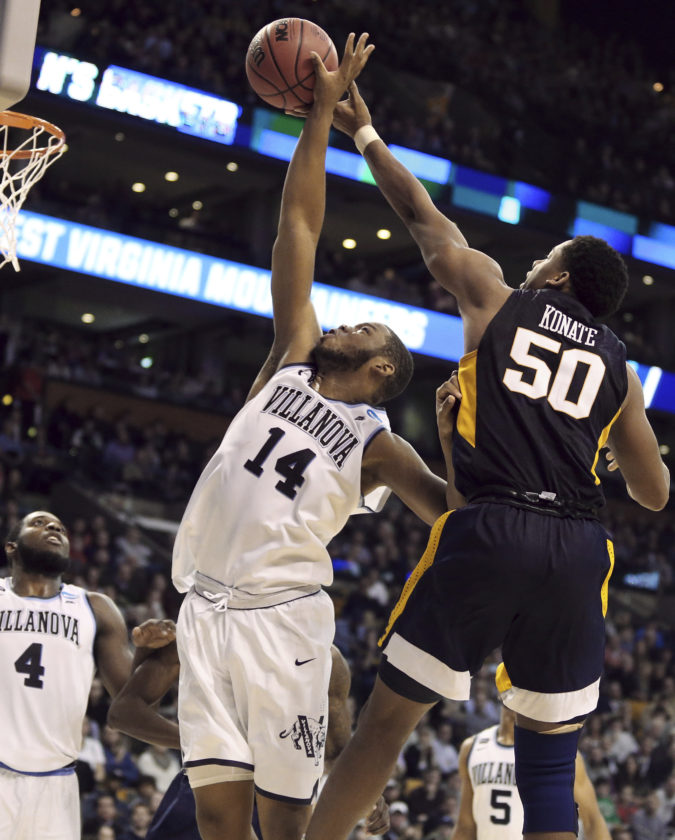 A unique center because of his ability to shoot 3s, Spellman has connected on a team-high 44.6 percent of his attempts from behind the arc. Averaging 10.8 points and a team-best 7.8 rebounds, Spellman was named the Big East’s freshman of the year.

Spellman dropped about 45 pounds since he arrived on campus, refocusing on his eating habits. He sat out all of last season as an academic redshirt. According to hoop-math.com, he only takes 29 percent of his shots at the rim, using his ability to shoot to pull opposing centers out of the lane. 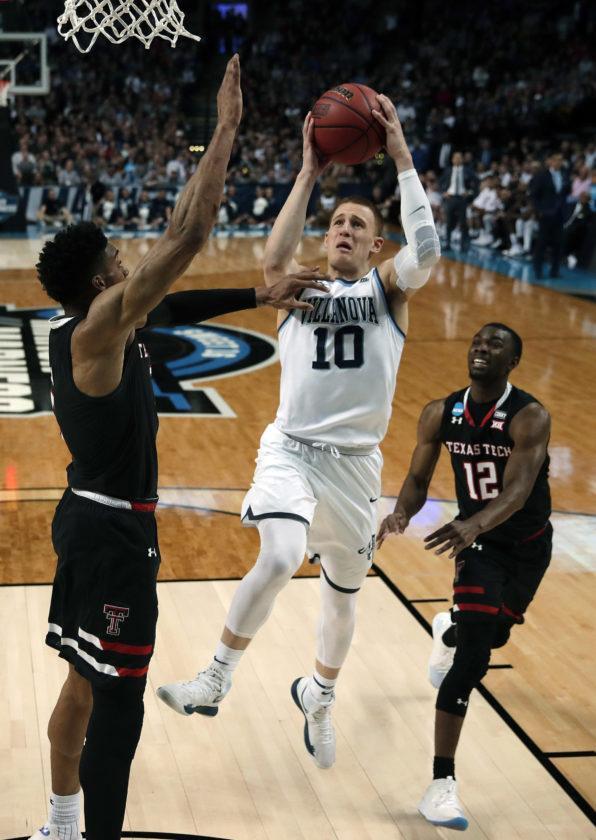 Playing off of the bench but earning starter’s minutes, DiVincenzo brings immediate energy to the floor. He ranks third on the team in scoring with 12.9 points per game, shooting 38.5 percent from the 3-point line. The Wildcats’ backup point guard, he ranks second in steals (42) and second in assists (133).

In the NCAA Tournament: In 100 minutes, DiVincenzo has recorded 44 points, 16 assists and 20 rebounds on 9 of 21 shooting from the 3-point line.

Kansas basketball director of student-athlete development Fred Quartlebaum and Villanova forward Eric Paschall, both from Hobbs Ferry, N.Y., reunite at Final Four weekend, before the Jayhawks take on the Wildcats in the 2018 national semifinals.

A threat to shoot from the 3-point line or slash to the rim, Paschall is averaging 10.3 points and 5.3 rebounds per game. He’s a talented defender, helping slow down Texas Tech’s Keenan Evans on ball screens in the Elite Eight. He played his freshman season at Fordham, earning 2015 Atlantic 10 Rookie of the Year honors.

In the NCAA Tournament: Averaging 11 points, 6.5 rebounds, 1.5 assists and 1 steal through four games. 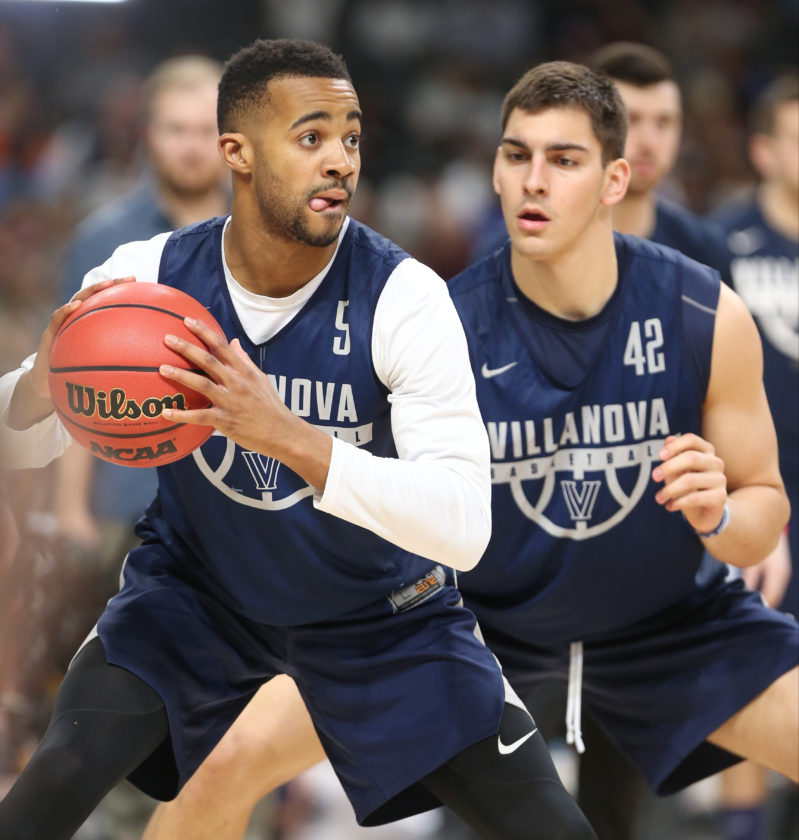 Villanova guard Phil Booth (5) looks to make a move against Villanova forward Dylan Painter (42) during a practice on Friday, March 30, 2018 at the Alamodome in San Antonio, Texas.

Known as the team’s top perimeter defender, Booth has matched up with West Virginia’s Jevon Carter and Texas Tech’s Keenan Evans in the last two games. A 39 percent shooter from the 3-point line, he’s averaging 10.3 points. He fractured a bone in his right hand earlier this season, missing seven games. The Wildcats lost games to St. John’s and Providence without him. His dad played college basketball at Coppin State and his mom played at Bowie State.

ONE THING VILLANOVA DOES WELL

The best offense in the country, according to most metrics, Villanova is extremely efficient. With patience and strong execution, the Wildcats shoot 40 percent from the 3-point line and 49.9 percent from the floor. They have three players shooting 41 percent or better from deep, reaching 80 or more points in six of their last eight games.

With limited depth, the key is to force the Wildcats into foul trouble. It’s nitpicking with a team that has four losses, but in each loss they’ve had at least one starter foul out. Outside of how the officials whistle the game, the Wildcats usually don’t force a ton of turnovers because they play with a seven-man rotation. During the NCAA Tournament, opposing teams are averaging 12.2 turnovers. 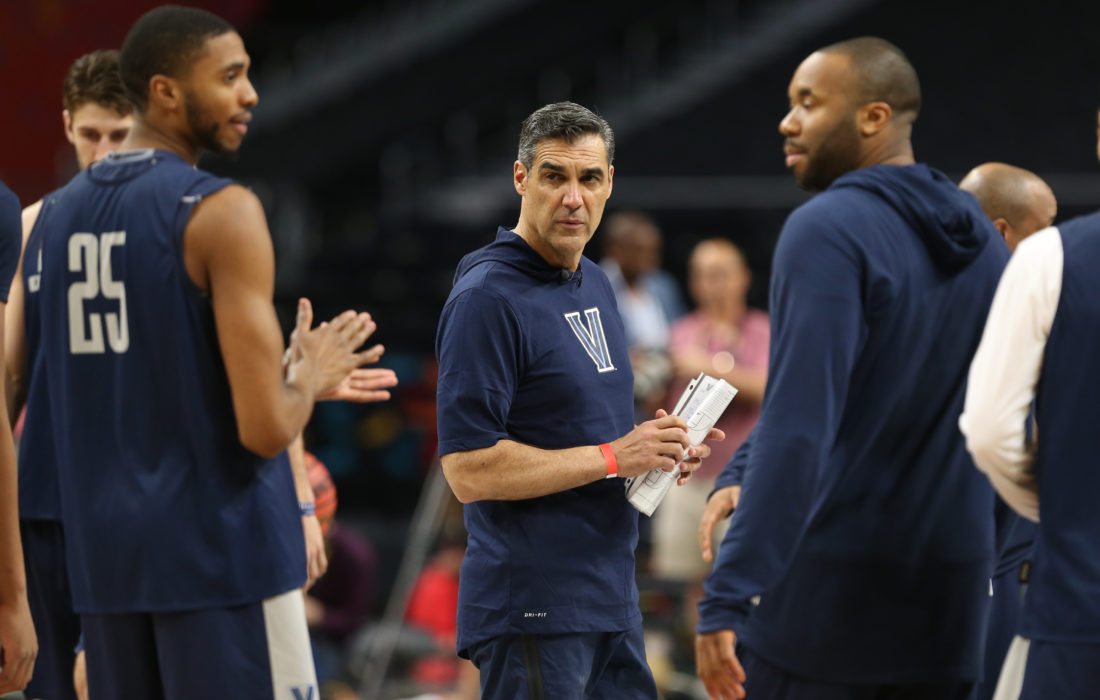 Villanova head coach Jay Wright watches over his practice on Friday, March 30, 2018 at the Alamodome in San Antonio, Texas.

In the Final Four for the second time in the last three years, Jay Wright has turned Villanova into one of the programs in the country. In his 17th season with Villanova, Wright has guided his team to four straight 30-win seasons with a national championship in 2016.

Prior to his time at Villanova, Wright coached at Hofstra for seven seasons. He won back-to-back American East titles in his final two years, exiting in the first round of the NCAA Tournament.

Villanova by 5. The Jayhawks will face a team that plays a lot like they do, which probably makes them as tough of a matchup as they’ve had all season. But the Jayhawks didn’t matchup well against Duke and they found a way to crush a much taller and athletic team on the glass. The key will be finding a third player to step up alongside Malik Newman and Devonte’ Graham. Nova will score its points but can KU keep up? I usually wouldn’t think so, but the Jayhawks have proven me wrong several times this year.