Getting to know: Clemson basketball 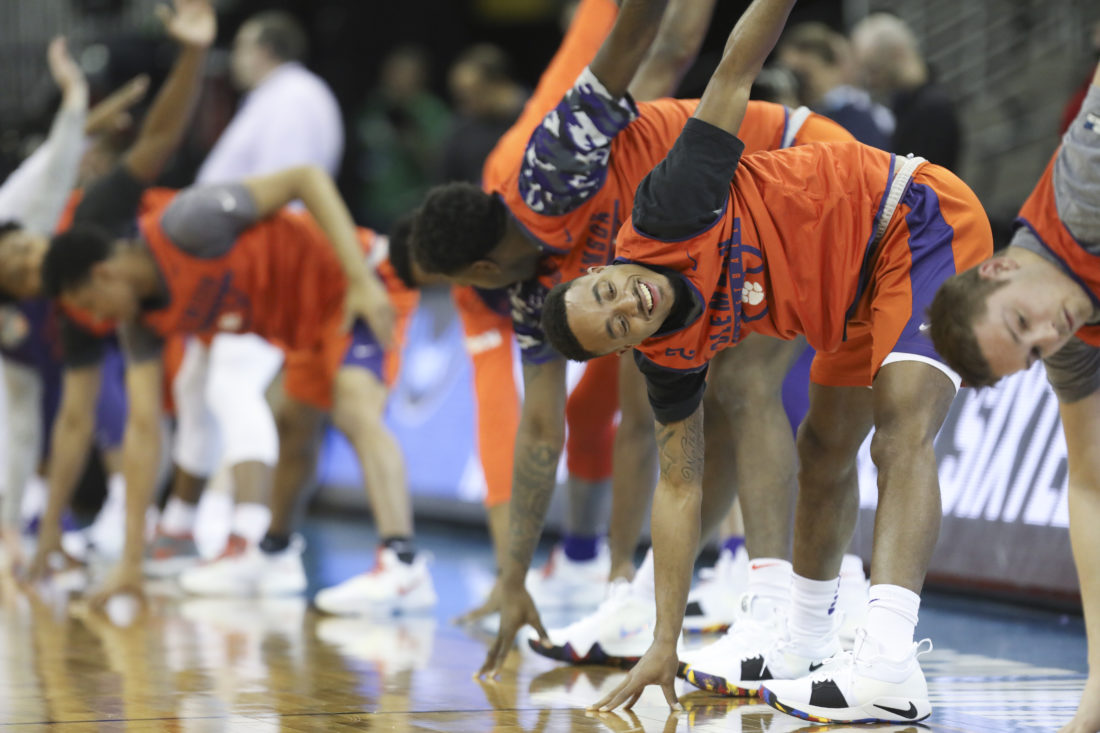 Clemson guard Marcquise Reed (2) smiles as he and the Tigers stretch out at the start of practice on Thursday, March 22, 2018 at CenturyLink Center in Omaha, Neb.

In the Sweet 16 for the first time since 1997, Clemson will play Kansas at 6:07 p.m. Friday for a spot in the Elite Eight. The Jayhawks have played in the Elite Eight in each of the last two seasons, Clemson has made it once in program history.

The fifth-seeded Tigers, voted to finish 13th in the ACC in the preseason poll, beat New Mexico State in the first round and crushed Auburn to continue their season. They’ve played without star senior forward Donte Grantham, who tore his ACL, since the end of January.

“They were probably the most impressive team, I felt like, in the first weekend,” Kansas coach Bill Self said.

Without Grantham, Clemson owns a 9-6 record with wins over NCAA Tournament teams North Carolina and Florida State in conference play.

Fun fact: The Tigers tied a program record for wins in a season (25) with their victory over Auburn in the Round of 32 last weekend.

Series history: It’s the first meeting between the two schools. 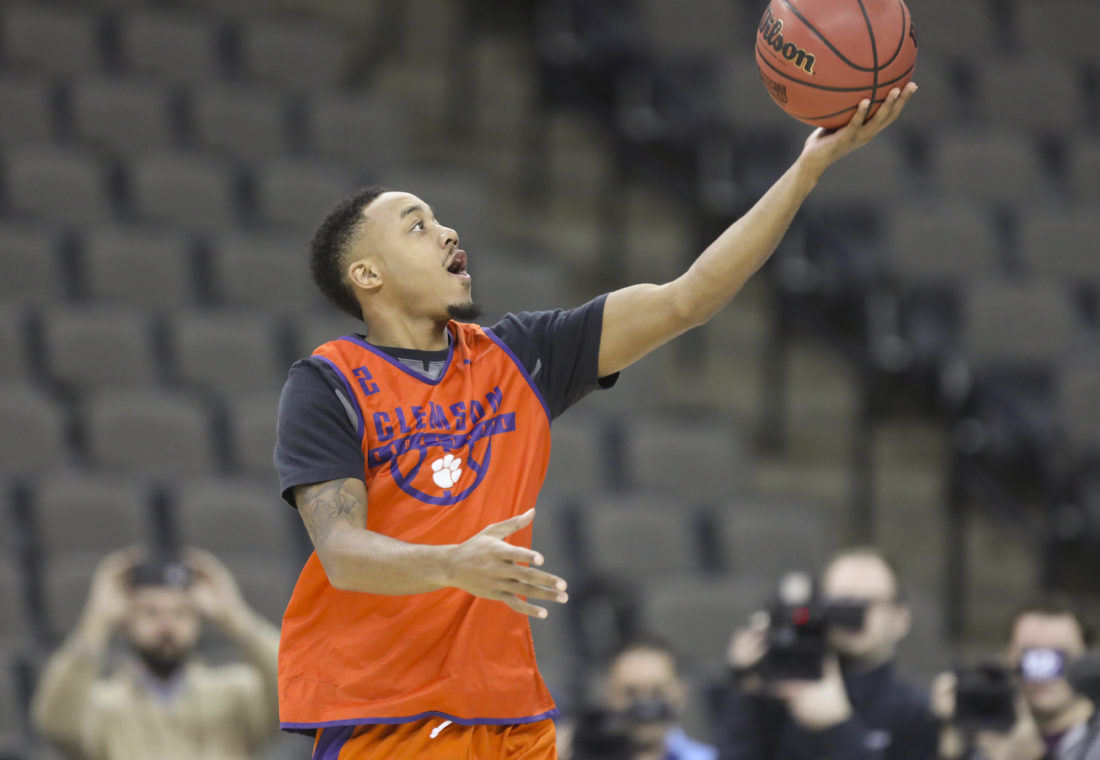 Clemson guard Marcquise Reed (2) swoops in to the bucket during practice on Thursday, March 22, 2018 at CenturyLink Center in Omaha, Neb.

A second-team all-ACC selection, Reed surpassed the 1,000-point milestone earlier this season. Averaging a team-best 15.9 points, Reed is shooting 35 percent from the 3-point line and 84.5 percent at the free-throw line. He leads the team with 58 steals.

Reed played his freshman season at Robert Morris, reaching the NCAA Tournament, before transferring to Clemson. Only three assists behind teammate Shelton Mitchell, Reed could become the first player to lead the Tigers in scoring, assists and steals since 2000.

• “He doesn’t talk a lot, he’s not a guy who’s showy at all. I think he just kind of comes in and does his thing,” Clemson coach Brad Brownell said. “He’s kind of like that as player because he will be quiet for 20 minutes and then all of a sudden, something will happen and he snaps and turns into this assassin making big shots.” 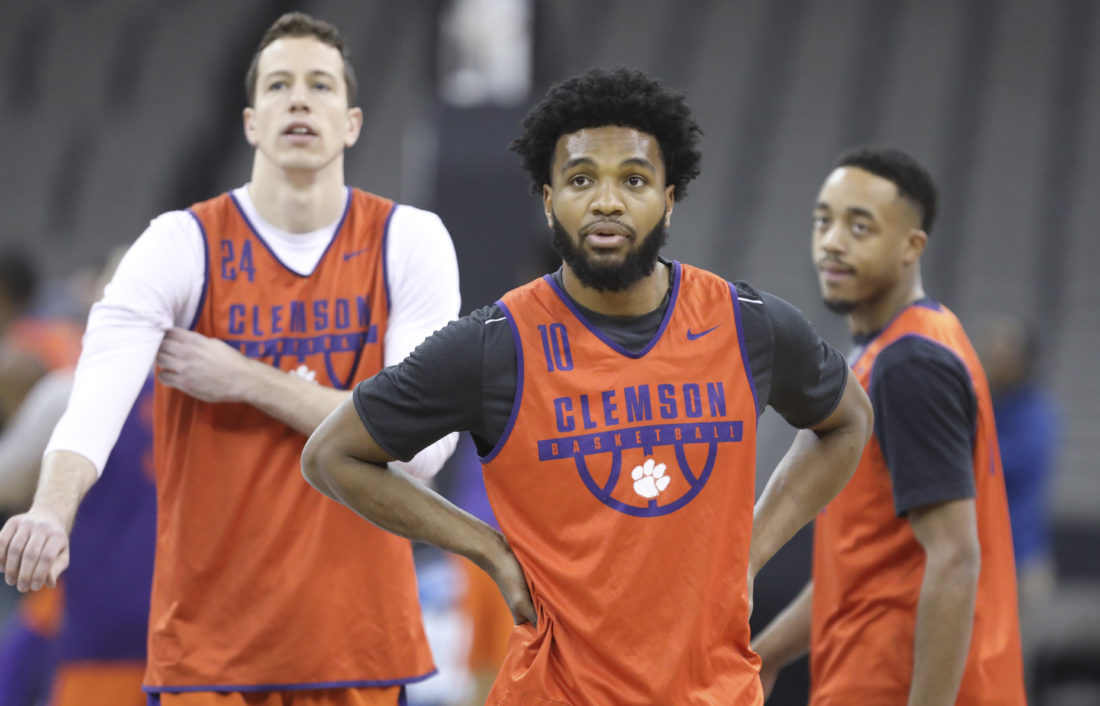 When the Tigers are playing well, Devoe is usually scoring. After Donte Grantham’s injury, the Tigers are undefeated when he scores more than 11 points, winless when does not. Clemson’s top 3-point shooter (39.9 percent), Devoe is averaging 13.7 points and 4.6 rebounds, earning an all-ACC honorable mention.

In the NCAA Tournament: Averaging 22 points, 3 rebounds and 3.5 assists on 8-for-14 shooting from the 3-point line. 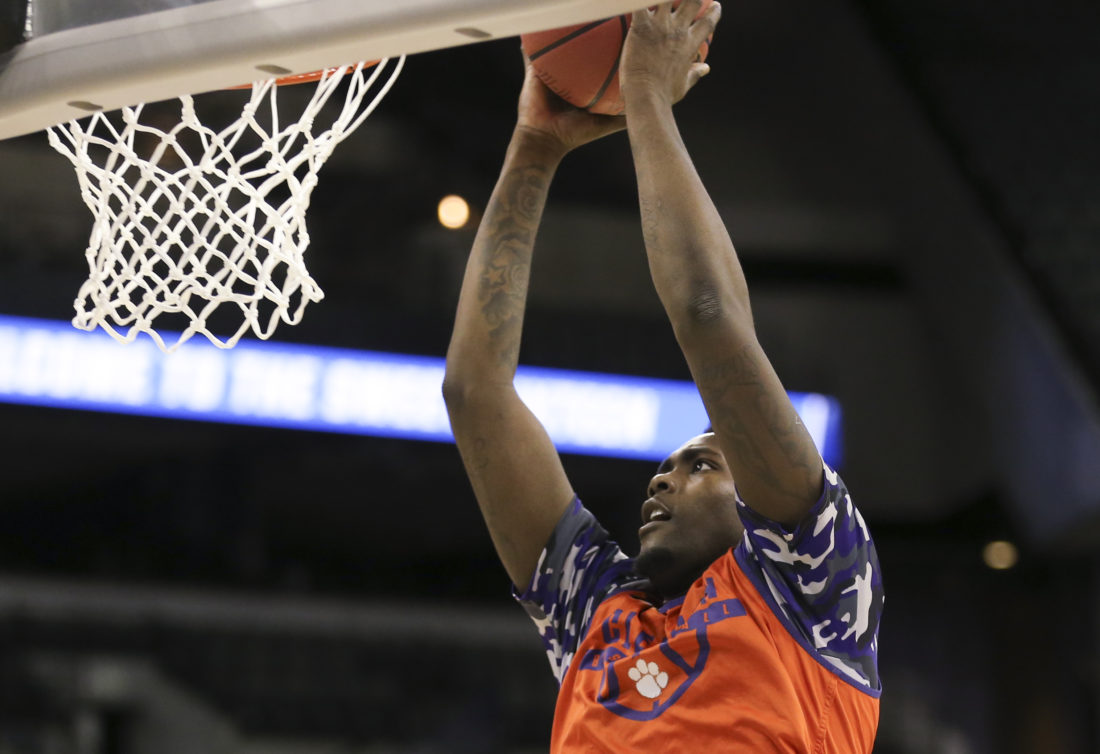 Clemson forward Elijah Thomas comes in for a dunk during practice on Thursday, March 22, 2018 at CenturyLink Center in Omaha, Neb.

A dominant shot shot blocker (2.2 swats per game, named to the ACC’s all-defensive team), Thomas is averaging 10.9 points and 8.1 rebounds with nine double-doubles. He leads the Tigers with 78 offensive rebounds, more than double any other player on the team. Thomas played his freshman season at Texas A&M before transferring to Clemson.

In the NCAA Tournament: Recorded 24 points, 21 rebounds and 5 blocks in 57 minutes while shooting 9-for-17 from the field. 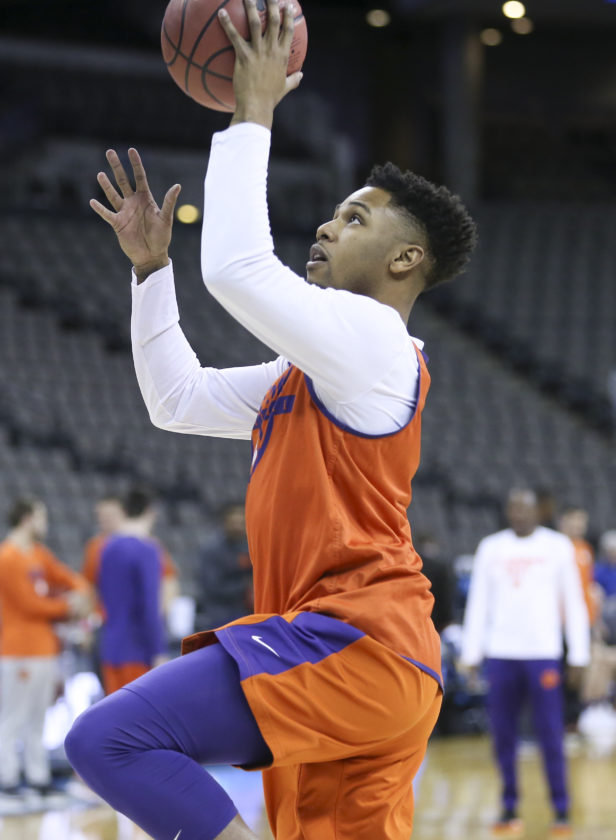 Clemson guard Shelton Mitchell (4) goes up to the bucket during practice on Thursday, March 22, 2018 at CenturyLink Center in Omaha, Neb.

A transfer from Vanderbilt, Mitchell leads the Tigers with 3.7 assists per game. He’s averaging 12.3 points, shooting 37 percent from the 3-point arc. According to hoop-math.com, he takes about a third of his shots at the rim, the highest mark among Clemson’s guards.

In the NCAA Tournament: Led the Tigers with 11 assists, 33 points and 9 rebounds in the first two games, shooting 10-19 from the floor. 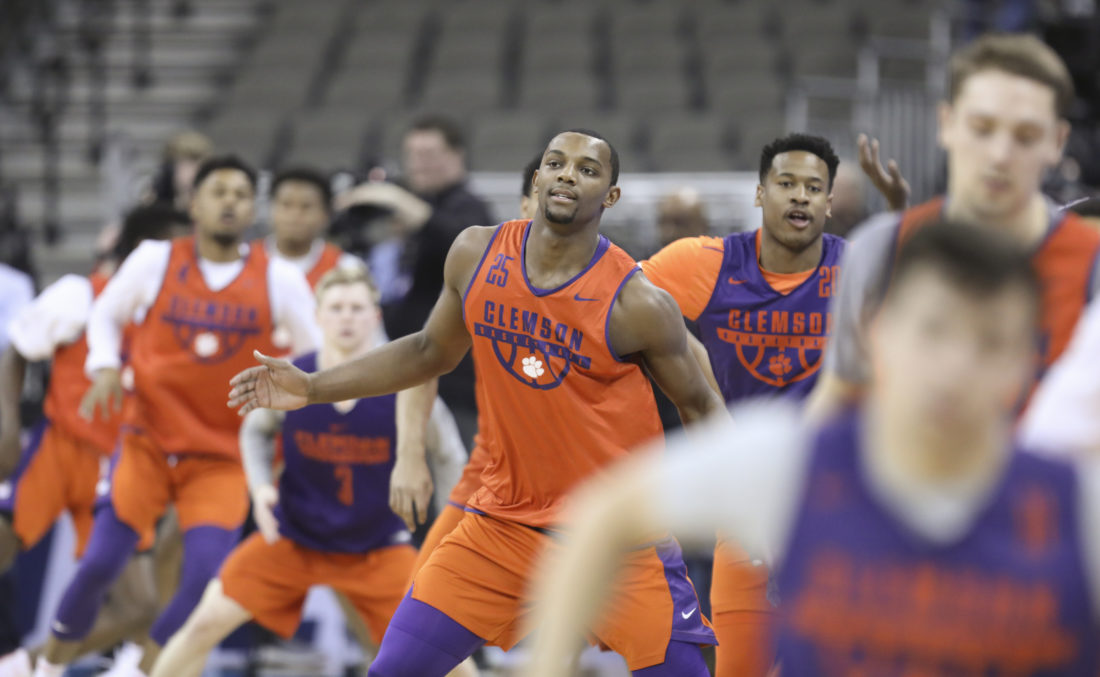 Clemson forward Aamir Simms (25) and the Tigers get warmed up at the start of practice on Thursday, March 22, 2018 at CenturyLink Center in Omaha, Neb.

Simms usually plays off the bench, averaging 4.0 points and 3.2 rebounds on 47.3 percent shooting from the field. In 15 minutes per game, Simms ranks second on the team in blocks (29) and fourth in offensive rebounds (25).

In the NCAA Tournament: Playing 43 minutes, he produced 12 points, 5 rebounds and 3 blocks while shooting 2-for-2 from the 3-point arc.

ONE THING CLEMSON DOES WELL

Ranked seventh in defensive efficiency by KenPom, the Tigers own one of the best defenses around the rim. With Elijah Thomas protecting the paint, they’ve limited opponents to 52.9 percent shooting on shots at the rim, which ranks 17th in the county according to hoop-math.com.

Add that with their strong transition defense and it becomes even tougher for opposing offenses to find ways to score.

Despite the Tigers’ strong defense protecting the paint, they don’t force many turnovers. Entering the tournament, Clemson ranked 213th in the country in turnover percentage defense and that didn’t change in the first two rounds. The Tigers forced 11 turnovers against New Mexico State and only six turnovers against Auburn. 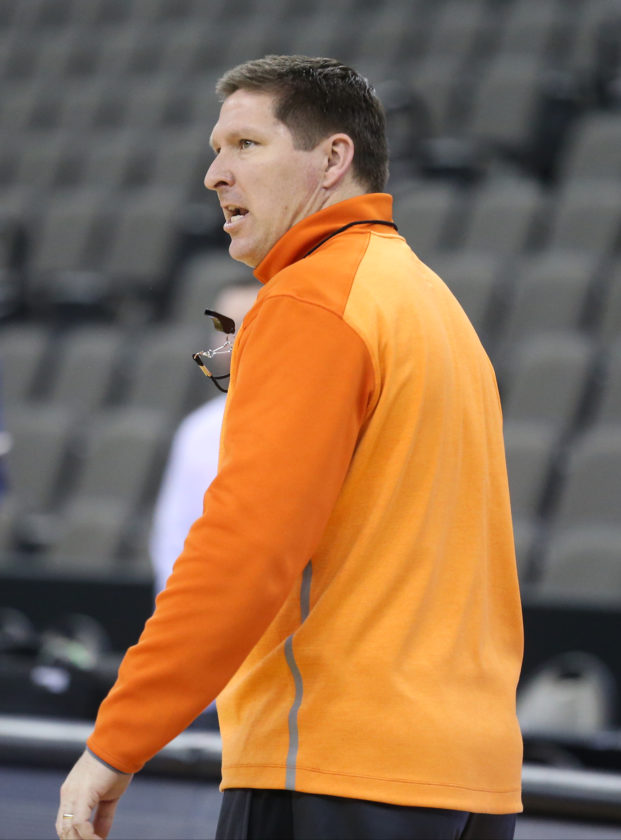 In his eighth season at Clemson, Brad Brownell led the Tigers into the NCAA Tournament for the first time since 2011, his first season in the program. Helping remove himself from the hot seat with his first-ever Sweet 16 appearance, Clemson added NIT appearances in 2014 and 2017.

Prior to his time at Clemson, Brownell spent four seasons each with UNC Wilmington and Wright State. He had four 20-win seasons with Wright State and two NCAA Tournament appearances at Wilmington.

Kansas by 5. The Tigers don’t allow many points around the rim and are strong at limiting points in transition. One weakness is defending the 3-point line (34.9 percent). I think it will be a slower-paced game for the Jayhawks, similar to their first-round game against Penn, but Svi Mykhailiuk, Malik Newman and Lagerald Vick should find plenty of looks from deep.