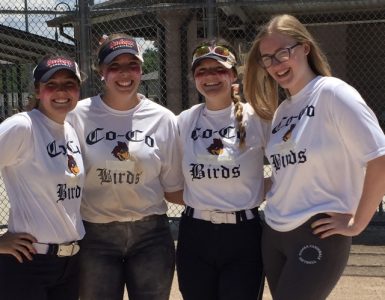 Eudora High softball seniors, from left, Lydia Brown, Sierra Smith, Lauren Abram and Alyssa Beckham got the chance on Wednesday, June 24, 2020, to play one game of their senior season at Blue Valley Sports Complex in Overland Park. EHS, which went by the name the Co-Co Birds on Wednesday, knocked off Paola, 12-1, in the one-day event.

Although the pandemic put a wrench in their softball plans, four seniors at Eudora High School got the sendoff they were looking for on Wednesday afternoon.

One of 32 teams participating in a one-day event put on by Midwest Sports Productions with the approval of the Kansas State High School Activities Association, Eudora knocked off league foe Paola, 12-1, in what will go down in the history books as the lone game of the 2020 EHS softball season.

“Like I told them after the game, it’s not very often you go undefeated, but I guess we did this year,” Eudora coach Bill Finucane said after the victory in the event dubbed “One Last Game.”

The game was the first and last of the 2020 season for seniors Lydia Brown, Sierra Smith, Lauren Abram and Alyssa Beckham.

Bella Gravatt, a senior at Piper High School, came up with the idea and approached MSP about hosting the event. MSP got in touch with KSHSAA and took it from there. While the 16-game showcase was put together largely for the 129 seniors on the teams from across Kansas that participated, Finucane said he was proud of his entire team for making it such a memorable day.

“I just told everybody to go out there and relax and have some fun,” Finucane said. “There wasn’t anything more to it than that. And I thought it was great how the girls who were not seniors were nice enough to come together and do this for our four seniors so they could at least have one nice memory of their senior season.”

That was exactly what Wednesday provided.

“I am so thankful that we were able to get in one last game,” said Abram, an outfielder and utility infielder. “It was very disappointing when we were counting down the days to the season, knowing that we were going to be so successful, only for it to get taken away from us in the blink of an eye.”

Beckham, who has been a team manager for the past three years, said missing out on the season was hard to take. But Wednesday’s ending changed the way she will remember her last hurrah, both because the Cardinals won and because she got a chance to step into the batter’s box.

“Managing this team has always been a highlight to my year,” said Beckham, who went 0-for-1 in her only at-bat but also may have received the loudest roar of the day as she walked to the plate. “Being able to reunite with my team and have fun one last time was amazing.”

The lost season ended Smith’s quest for a spot on the Class 4A all-state team for the third year in a row. But the chance to play one last time with the friends and community that welcomed her with open arms before her sophomore season was something she won’t soon forget. Smith finished 3-for-4 at the plate, with two doubles, a triple and three runs scored on Wednesday.

“Moving here and playing softball changed my high school experience,” Smith said. “I’m so appreciative of being able to play one last game.”

Although the stats and specifics of Wednesday’s victory were strictly secondary, Eudora still delivered.

Sadie Walker was the winning pitcher, tossing all seven innings and giving up just two hits. She also doubled twice and scored a run.

Underclassmen Harper Schreiner (4-for-4 with three singles, a triple and three runs scored), Kira Baker (2-for-3) and Emma Durr (2-for-4 with a double and a home run) sparked the offense and helped make sure the Cards came out on top in their season finale.

And, Brown, who played second base, said she was happy to see her teammates join in the fun and have some success of their own on a day designed to celebrate the seniors.

“I’m really happy I got to play one last game with my team,” said Brown, who was 2-for-2 at the plate with two runs scored. “It was heartbreaking when the season was canceled because we all had really high hopes. But thank you to all of my teammates for making time to play and coaches for arranging everything. It was an honor playing for Eudora and especially for coach Finucane and coach Jan Kushner. I am forever grateful.” 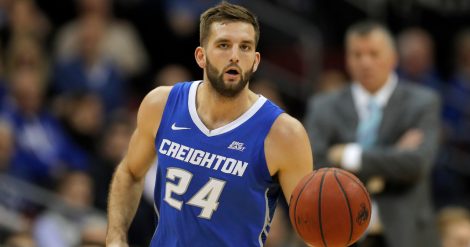 Preps notebook: How 5 area basketball teams made it to the state tourney and a look at their path to state title 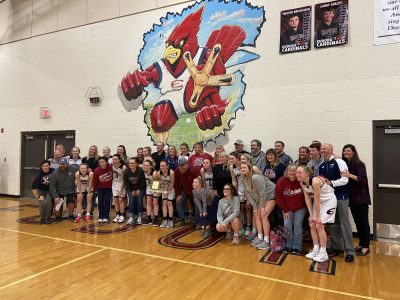