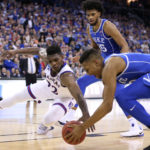 Kansas forward Silvio De Sousa (22) and Duke forward Javin DeLaurier (12) fight for a ball during the second half, Sunday, March 25, 2018 at CenturyLink Center in Omaha, Neb.

New York — One of the most recent and notable games of KU junior Silvio De Sousa’s college career came against Tuesday night’s opponent.

And that fact was not lost on the KU big man ahead of the Champions Classic clash with Duke.

“That was one of the biggest games I’ve ever had,” recalled De Sousa of his 4-point, 10-rebound outing against the Blue Devils in the 2018 Elite Eight victory that sent the Jayhawks to the Final Four. “And let me tell you, I think about it (all the time). Whenever I step on the court, I think, ‘Hey, I played such a huge game with a lot of people watching and it was against Duke.’ That’s the motivation I want to have (for this one), and I’m just looking forward to it.”

Truth be told, De Sousa has been looking forward to this one for much longer than just the past few days.

Although there were certain steps that were necessary to get to this point — offseason conditioning, summer workouts, boot camp and two exhibition games — the Jayhawks have known for months that rematch with Duke was the first game on their schedule.

“This is the type of game we’ve been working on all summer and now it’s here,” De Sousa said. “I think we’re ready for it. And we’re going to go out there on Tuesday and give it everything we have.”

Added KU point guard Devon Dotson: “Yeah, it’s a good feeling when we get these tune-up games under our belt and now it’s the real thing. Now it’s time to really see what works best for us out there on the court.”

KU coach Bill Self on Saturday said that senior grad transfer Isaiah Moss likely would be held out of Tuesday’s battle with the Blue Devils if he was not able to practice full speed on Sunday.

Moss, who played five minutes in KU’s second exhibition game last week, marking his first official activity as a Jayhawk, has been dealing with an injured hamstring for the past couple of months.

Although he was able to play last week, Self said Moss still was not at full speed and as explosive as he could be, and the goal now, as much as KU would like to have Moss against Duke, is to make sure he heals fully before joining the rotation full time.

Dotson, however, is expected to be 100% after dealing with a rolled ankle that kept him out of KU’s first exhibition game.

Dotson was able to start and play a full workload in last week’s exhibition victory. Asked after that one if he was back to 100%, Dotson smiled and said simply, “Yeah, I’m good.”

On Saturday afternoon, Self revealed that the plan for senior forward Mitch Lightfoot was to redshirt the 2019-20 season.

The move, which saves Lightfoot’s final season of eligibility for the 2020-21 season, when more playing time in the KU front court is more likely, was expected but became official with Self’s announcement.

Later Saturday, Lightfoot added his own thoughts about the move on social media.

“With the support of the coaching staff, my family and friends, we have decided that I will redshirt for the 2019-20 season,” Lightfoot wrote in a message he posted on Twitter. “While I know it’ll be hard to sit out of competition, I am eager to continue to provide leadership, support and competition to the team in a number of other ways. I love Kansas and its people more than most can understand. I’m so grateful to have the opportunity to be here for another year. Rock Chalk.”

Kansas target and five-star talent Bryce Thompson, a five-star shooting guard out of Booker T. Washington High in Tulsa, Okla., trimmed his list of finalists to four on Sunday.

The Jayhawks were one of the teams to make the cut, with North Carolina, Oklahoma and Oklahoma State also still alive in Thompson’s recruitment.

The talented and still-rising versatile guard who has been KU’s top target in the class for months is expected to announce his decision sometime in the next couple of weeks.

The early signing period arrives Nov. 13 and runs through Nov. 20.