KU target R.J. Hampton, at Nike EYBL event, says he has nothing left to prove in high school 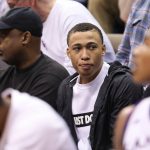 It was a big weekend for Kansas basketball recruiting, both in the 2019 class that still has plenty of holes to fill, and beyond.

The KU coaching staff welcomed Class of 2019 forward Tristan Enaruna to town for an official visit over the weekend and also was busy tracking some of the top players in future classes all over the country.

Here’s a quick recap of one of the biggest stories that came up this weekend on a vibrant recruiting trail.

Class of 2020 guard R.J. Hampton, in a starring role at the Nike EYBL event in Atlanta, Hampton delivered a monster night in one of the showcase games, going for 41 points and 6 assists in a loss by AAU squad Drive Nation.

While the loud performance on the floor certainly was noticed, it was comments made by Hampton and his father off the court that likely stood out more.

With the 6-foot-5 guard from Little Elm, Texas, still trying to decide whether to reclassify into the 2019 class of stay in the 2020 class (where he is ranked No. 5 overall by Rivals.com), Hampton offered a hint at where he might be headed.

“I don’t think I have anything left in high school to prove to anybody,” Hampton said, according to ESPN.com’s Jeff Borzello.

Shortly after that, Hampton’s father, Rod Hampton, met with a small group of media members in attendance and, according to Borzello, said there was “a better than 50 percent chance” that his son reclassifies and is playing college basketball somewhere this winter.

Hampton, who has a final four of Kansas, Memphis, Duke and Kentucky, reminded people over the weekend that KU held a special place in his heart.

“Coach Self has been on me real hard,” said Hampton, according to CatsIllustrated.com. “He was my first blue blood type of offer. With him, (it’s), ‘You can come in and get us back to the Final Four.’ With the guys they might have coming back, they don’t have any commitments from any top guys yet. They could be scary.”

One other notable Hampton soundbite from the weekend came from his father, who talked about his tight relationship with the KU coaching staff.

“Coach Jerrance Howard is like family to me,” Rod Hampton said, according to JayhawkSlant.com. “I mean, we can talk about anything and be comfortable. It doesn’t matter if I call him at 3 in the afternoon or 3 at night, he’s going to pick up and vice versa. He’s just like family.