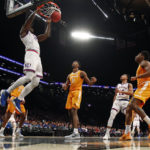 With so many rotation players from the Kansas basketball team transferring, declaring for the draft or testing the NBA waters it seemed a safe bet that Udoka Azubuike, who dipped his sizable toes into the pre-draft process a year ago, might not be around for the 2019-20 season, either.

Unfortunately for the center from Delta, Nigeria, his still mending right wrist led him to stick around.

This is, of course, also quite the fortunate development for head coach Bill Self and every player who gets a chance to team up with Azubuike at KU next season, because his presence equates to more victories.

As a junior, the largest man on KU’s campus averaged 13.4 points, 6.8 rebounds and 1.6 blocks, while shooting 70.5% from the floor in Kansas victories.

Here’s what Azubuike’s numbers looked like in KU losses: …

Oh, here we are. There aren’t any of those stats.

When the big man played KU won. Would the Jayhawks have gone undefeated with a healthy Azubuike? Obviously not. But, let’s be honest, they would have finished with a better overall record than their 26-10 mark, would have had a much better chance of extending the program’s Big 12 title streak and would have ended up with a better seed in the NCAA Tournament — and, theoretically at least, an easier March Madness path.

True, Azubuike missed 75% of the season — a four-game stretch in December, followed by the wrist injury in early January that sidelined him for the remainder of the schedule. But in the games in which the 7-footer played, the Jayhawks didn’t lose.

KU went 9-0 with Azubuike manning the paint and finishing possessions with his backboard-vibrating dunks. What’s more, three of KU’s best wins of the season came with Azubuike in the lineup: neutral court victories over Michigan State, Marquette and Tennessee.

Outside of a surefire top-three draft pick, Azubuike is as big a difference-maker as any college basketball coach could dream to have on a roster.

The man is so massive inside that KU opponents know he can’t be stopped and still can’t do much about keeping the ball out of his hands. In his previous two seasons, a span of 45 games, Azubuike shot 266-for-352 (75.6%) from the floor, because he doesn’t take shots outside of his comfort zone and knows his limitations on offense.

The big man isn’t perfect, far from it. Good thing for KU, because if he was he would have already left for the NBA, either last year or this year.

Even when facing teams better equipped to deal with him, Azubuike’s presence alone makes KU a better offensive team. His minutes are still impactful ones when foul trouble limits how long he can be on the floor, as his 270-pound frame wears out the opponents who have to do their best to guard him.

When facing double teams from larger front lines that make it more difficult for him to catch and get to the rim, the fact that Azubuike’s out there at the very least makes it easier for KU perimeter players to find open shots and/or driving lanes. The attention he demands can open up offensive rebound opportunities for his teammates, too. Congratulations, David McCormack, you’ve just been gifted some easy putbacks and follow jams for your sophomore highlight reel.

We all know about Azubuike’s free throw issues — 41.3% as a sophomore and 11-for-32 as a junior (34.4%). That’s a discussion for another day. For now, head coach Bill Self and his Jayhawks can focus on how much easier it will be to win games next season, with their overpowering senior center on the floor.

If Azubuike can stay healthy during what will be his final year in Lawrence, it’s hard to envision the Jayhawks having another turbulent on-court season, such as the one they just went through, mostly without him.

And should the NCAA happen to clear Silvio De Sousa for takeoff, by granting KU’s appeal of his suspension, assuming Devon Dotson returns, KU should have one of the best lineups in the country.

Unless the NCAA hits Kansas where it hurts in the form of a postseason ban as a result of the federal investigation into college basketball corruption, the Jayhawks look like a team that will pick up plenty of 2020 Final Four buzz between now and next March.