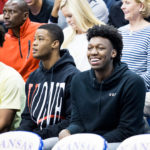 Kansas basketball recruits, from left to right, Jeremiah Robinson-Earl, Cassius Stanley and James Wiseman, take in the scene at Late Night in the Phog on Friday, Sept. 28, 2018.

On the same afternoon that Kansas basketball coaches and players learned center Udoka Azubuike will be back for his senior season, the Jayhawks missed out on a highly regarded prep guard who could have complemented the 7-footer inside.

Graded as a four-star shooting guard in the Class of 2019, Cassius Stanley announced Monday his decision to play college basketball at Duke.

Rated the No. 33 prospect in the nation by Rivals, Stanley, a 6-foot-5 guard from Chatsworth, Calif., became the second high school senior in the past four days to consider KU a finalist but ultimately go with Mike Krzyzewski’s Blue Devils.

Five-star big Matthew Hurt, rated the No. 7 overall prospect in the class, did the same this past Friday.

He made his choice official during a ceremony at his high school’s gymnasium on Monday afternoon.

During the announcement, which was streamed live by the L.A. Times’ Eric Sondheimer, Stanley called KU a great school with a great coaching staff.

But he ultimately went with Duke, while making his decision known in a video that had been produced beforehand and shown on a large screen hanging from the gym’s ceiling.

“It feels great to get it off my chest,” Stanley said after the video concluded. “I’m just so excited right now.”

This past week, at KU’s annual postseason banquet, Self made known his confidence that KU would add to its recruiting class in the near future.

T.J. Holyfield, a grad transfer from Stephen F. Austin, is visiting KU this week, and planned on arriving Monday. A 6-8 forward, Holyfield also visited Texas Tech over the weekend. He averaged 12.9 points and 6.4 rebounds in 2017-18, before missing this past season with a shoulder injury.

A Chicago native, Charlie Moore’s next stop will be in his hometown.

Jeff Goodman of Stadium reported Monday afternoon that Moore will transfer to DePaul.

Moore’s college basketball career began at Cal, but he transferred to KU, where he played just one year, as a redshirt sophomore.