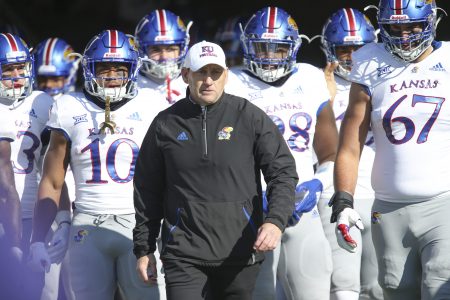 In this photo from Nov. 10, 2018, then-Kansas head coach David Beaty takes the field with the Jayhawks prior to kickoff at Bill Snyder Family Stadium in Manhattan.

A June 5 settlement agreement between Kansas Athletics and former KU football coach David Beaty totaling $2.55 million shows that $357,000 of that total is designated to pay Beaty for claims of lost wages, while the remaining $2.193 million is to compensate Beaty for other claims against the university — mainly his disputed contractual buyout.

The agreement has no confidentiality requirement for either party and also stipulates that Beaty and Kansas Athletics are each responsible for their own legal bills in the case. The Journal-World obtained the settlement agreement Thursday via a Kansas Open Records Act request.

Beyond the breakdown of the $2.55 million payout, the settlement agreement appears routine. It states that Beaty must dismiss the lawsuit he filed against the school in March 2019, that he cannot sue the school again for the same charges and that Beaty and KU are released from any liability related to the litigation.

Beaty sued KU 15 months ago, alleging the athletics department and its director, Jeff Long, “concocted” a reason to retroactively fire him for cause and avoid paying his original $3 million contract buyout after he was fired in November 2018.

As part of the settlement agreement agreement, neither party budged from their positions when the suit was first filed. Instead, Beaty and KU entered a “compromise of disputed claims” while recognizing the “inconvenience and uncertainty of continued litigation,” according to the agreement.

KU will pay Beaty the $357,000 directly through a wire transfer and will record the transaction using an IRS W-2 form, according to the agreement. The other $2.193 million will be paid to Beaty’s company, DB Sports, also through a wire transfer. The settlement agreement states that those funds will come from a lump sum that KU placed in escrow after Beaty’s dismissal.

During the course of reporting on the litigation, the Journal-World twice asked for documentation of any escrow funds related to Beaty’s dismissal and was told both times that such documents did not exist.

Also on Thursday, the Journal-World learned through the Kansas Open Records Act that KU’s outside legal bills to fight the litigation currently total $477,075.59 since the university retained Kansas City, Mo., firm Bryan Cave Leighton Paisner in November. That figure does not include charges for services performed in the months of May or June, as the case was reaching its conclusion; the university has not yet received those invoices.

Invoices billed to the University’s General Counsel office indicate the following charges for services provided during the prior month:

As the Journal-World previously reported, the firm gave KU a 10% discount on all services as part of the contractual agreement to take the case, though a reason was not specified.

The Journal-World also requested communications between top KU officials over the past month that include the terms “Beaty” and “settlement.” KU on Thursday denied that request, citing a statute in the law that exempts personnel records from disclosure.

Beaty has not worked for KU since November 2018.