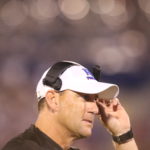 After a 15-month legal battle, the University of Kansas and former football coach David Beaty have reached a $2.55 million settlement in Beaty’s lawsuit over his disputed firing.

Beaty was fired in November 2018, and he sued the university in March 2019, accusing KU of improperly firing him for cause and “concocting” alleged NCAA violations in order to withhold a $3 million buyout included in his contract. The settlement, which KU announced late Friday, is about half a million dollars less than the original buyout that Beaty was seeking.

In a statement to the Journal-World, Beaty’s lead attorney, Michael Lyons, said Beaty and his family were happy to have the ordeal behind them.

“I believe the settlement speaks for itself. Kansas ultimately spent more money on this misadventure than they would have spent had they simply honored their commitment to Coach Beaty and his family,” Lyons said. “In the process, Kansas’ leadership has subjected the athletics department to unnecessary additional scrutiny from the NCAA and a loss of credibility in the court of public opinion.

“Today is a victory for not only Coach Beaty but coaches everywhere,” he added. “Let this be a lesson to every institution watching. If you want to backtrack and dishonor your commitments, do so at your peril.”

In a statement, the university said that despite the settlement, it maintains that the facts and principles behind its decision to fire Beaty for cause remain intact.

“For the betterment of KU, and driven by a willingness to move forward during a time of uncertainty in college athletics, the University has now put this matter behind us,” the statement said.

The $2.55 million settlement, KU said, will be paid through the original amount placed in escrow during the 2018-2019 fiscal year following Beaty’s separation from KU.

During the course of reporting on the litigation, the Journal-World filed requests with KU under the Kansas Open Records Act for any agreements to put Beaty’s contract buyout in escrow. It was told such records didn’t exist.

Though the settlement is less than Beaty’s buyout in his contract, KU in all likelihood will lose money in the costs it incurred throughout the extended legal battle.

In April, the Journal-World reported that outside legal bills to fight the case had already cost KU over $350,000 — and the invoices the newspaper received dated only through March. Many time-consuming legal filings took place in the months following, and the Journal-World will request any final legal invoices in the coming days.

Though the case is settled, the low-level NCAA violations that Beaty is accused of — using more coaches than permitted under NCAA rules — remain as part of the university’s larger infractions case, which also includes much more serious allegations against its men’s basketball program.

Settling the case with Beaty will likely keep some unsavory information from seeing the light of day in a public court battle. For starters, a judge in the case ruled in April that raw footage from “Miles to Go,” an ESPN documentary series following the first season of current KU football coach Les Miles, could be used as evidence in the case. Beaty’s team had argued it would show Athletic Director Jeff Long planning Beaty’s ouster prior to the start of the 2018 season.

T.J. Gassnola, the central figure in the Adidas pay-for-play scandal that rocked college basketball in 2017, was also scheduled to be deposed as part of Beaty’s lawsuit, and had been served with a subpoena. That information could have posed trouble for the men’s basketball program if Gassnola had provided new information about goings-on in the KU athletic department that hadn’t been previously disclosed.

In late May, the NCAA Committee on Infractions ruled that depositions from Beaty’s trial — from Long and two former assistant coaches — could be used in determining KU’s infractions case, the Journal-World previously reported. If Gassnola had been deposed, one of the parties could have petitioned the committee to include Gassnola’s deposition in the NCAA case, as well.

Beaty has been mostly out of work in the football world since his termination at Kansas. He served briefly as an offensive analyst at Texas for coach Tom Herman, but had been unable to secure a position elsewhere because of the litigation with KU, he argued during the case.