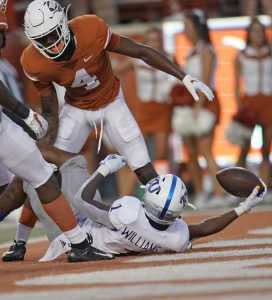 Kansas' Pooka Williams Jr (1) falls into the end zone past Texas' Anthony Cook (4) for a touchdown during the first half of an NCAA college football game in Austin, Texas, Saturday, Oct. 19, 2019. (AP Photo/Chuck Burton)

Earlier this week, two of the Kansas football program’s most dynamic offensive players were named to watch lists that honor all-around versatility.

Awards and watch lists are nothing new for Williams, who has earned several all-Big 12 honors and been on a handful of weekly and season-long watch lists throughout his first two seasons at KU.

The two Jayhawks combined for 2,262 all-purpose yards in 2019, with Williams leading KU in rushing yards (1,061) and also providing a receiving threat out of the backfield.

Robinson, a native of Los Angeles, ranked among the top receivers in the Big 12 in 2019 (727 yards and eight touchdowns on 45 receptions) and also returned 11 kicks for 247 yards.

Williams came to KU before the 2018 season as one of the highest-rated prospects the Jayhawks had landed in years. He was ranked as the 11th best all-purpose back in the country by ESPN and recently was voted as the best high school running back in Louisiana history by a series of polls and fan votes by Varsity Sports Now Louisiana in his home state.

Robinson came to KU the same season after spending his freshman year at El Camino CC, where he led the team with 62 receptions and 1,274 yards, earning him a three-star ranking from Rivals.com.

He has played in all 24 games since joining the Jayhawks.

The Paul Hornung Award was created by the LSC in January 2010 with the support of Paul Hornung, who is considered by many the most versatile player in the history of college and pro football.

Hornung won the 1956 Heisman Trophy at quarterback for Notre Dame and was the No. 1 pick in the 1957 NFL draft. He played every position in the backfield during his career with the Irish, where he also punted, kicked, returned kicks and played defensive back.

In its 84th year, the Maxwell Award has been presented to the College Player of the Year since 1937 and is named in honor of Robert “Tiny” Maxwell, a former standout at Swarthmore College and a renowned sports writer and football official.