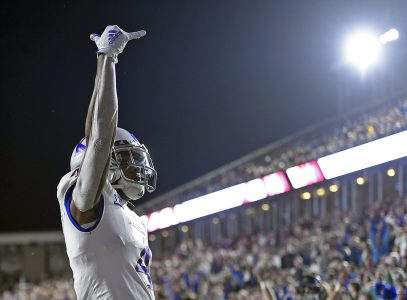 (Boston, MA, 09/13/19) DKansas Jayhawks wide receiver Andrew Parchment (4) celebrate a touchdown against the Boston College Eagles during the first half of an NCAA football game at Boston College in Boston, Mass., on Friday, September 13, 2019.

The Jayhawks were one of five Big 12 programs to put multiple players on the preseason all-conference offensive team. Baylor, TCU and West Virginia did not have any.

The teams, which included 15 players on offense and 15 on defense, were voted on by media members who cover the conference.

Oklahoma quarterback Spencer Rattler, a redshirt freshman from Phoenix, was projected as the conference’s newcomer of the year.

The preseason honor is the second in a row for Williams, a dynamic junior from Louisiana who has delivered back-to-back 1,000-yard seasons for the Jayhawks. 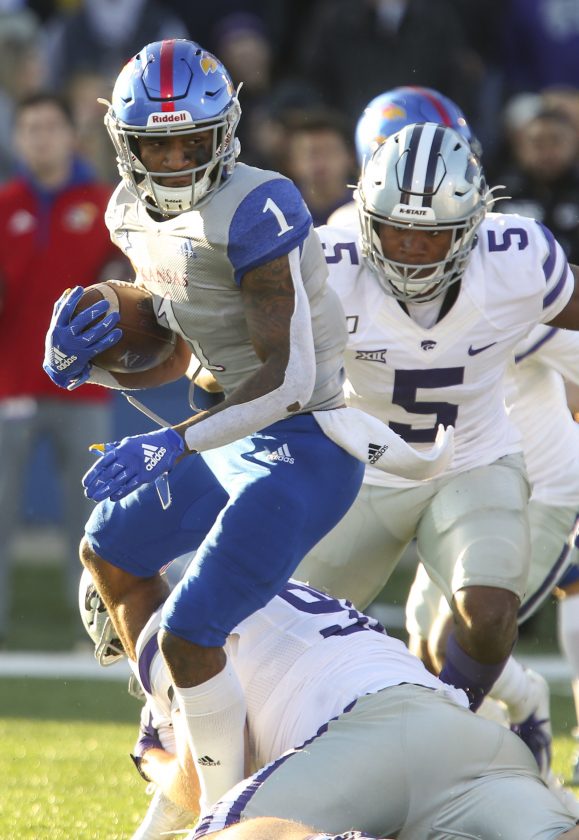 Kansas running back Pooka Williams Jr. (1) gets snagged around the ankles by Kansas State defensive tackle Jordan Mittie (91) during the third quarter on Saturday, Nov. 2, 2019 at Memorial Stadium. At right is Kansas State linebacker Da’Quan Patton (5).

Those numbers earned Williams a spot on the Associated Press and Big 12 all-conference teams. Williams also was named to the all-Big 12 first team following his freshman season, when he was named AP offensive freshman of the year and AP newcomer of the year.

Earlier in the day, the senior from Fort Lauderdale, Fla., was also named to the preseason watch list for the Biletnikoff Award, given annually to the best receiver in college football.

Parchment’s 65 receptions last season, in an up-tempo, high-octane Kansas offense under new offensive coordinator Brent Dearmon, led the team and were the seventh most by a KU wideout in a single season in program history.

His 831 yards are the second most among returning Big 12 receivers, and Parchment also ranked second on the 2019 Jayhawks with seven touchdowns. He finished fourth in the Big 12 last season in receptions per game (5.4) and receiving yards per game (69.3).