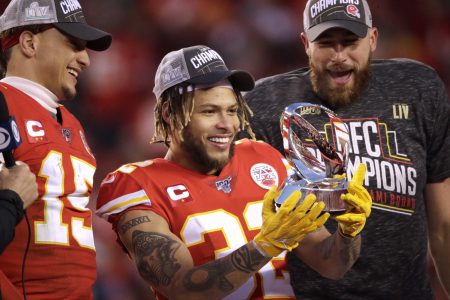 Kansas City Chiefs' Tyrann Mathieu is flanked by Patrick Mahomes, left, and Travis Kelce as he holds the Lamar Hunt Trophy after the NFL AFC Championship football game against the Tennessee Titans Sunday, Jan. 19, 2020, in Kansas City, MO. The Chiefs won 35-24 to advance to Super Bowl 54.

It didn’t take moving to Lawrence or seeing the local NFL franchise sign one of his favorite former players for Kansas football coach Les Miles to feel connected to the Kansas City Chiefs.

In fact, Miles will tell you he became a Chiefs fan long before the organization signed Tyrann Mathieu this past offseason, a move that helped the organization reach the Super Bowl for the first time in 50 years.

Miles began keeping up with the Chiefs during some far less entertaining seasons, more than a decade ago.

“I’ve been a Chiefs fan since Tyson Jackson,” Miles proclaimed, referencing when the defensive lineman from LSU, where Miles coached at the time, became the Chiefs’ first-round pick, No. 3 overall, in the 2009 NFL Draft.

Actually, Miles was paying attention to Lawrence’s favorite NFL team even before that, as the Chiefs also drafted former LSU players Dwayne Bowe (2007) and Glenn Dorsey (2008) in the first round, before making it three consecutive years of selecting Tigers with the Jackson pick.

Miles’ vested interest in the Chiefs reached a new level during the course of the past year, with Mathieu becoming a starting safety for the team, years after the defensive back was a Heisman Trophy finalist under Miles at LSU. 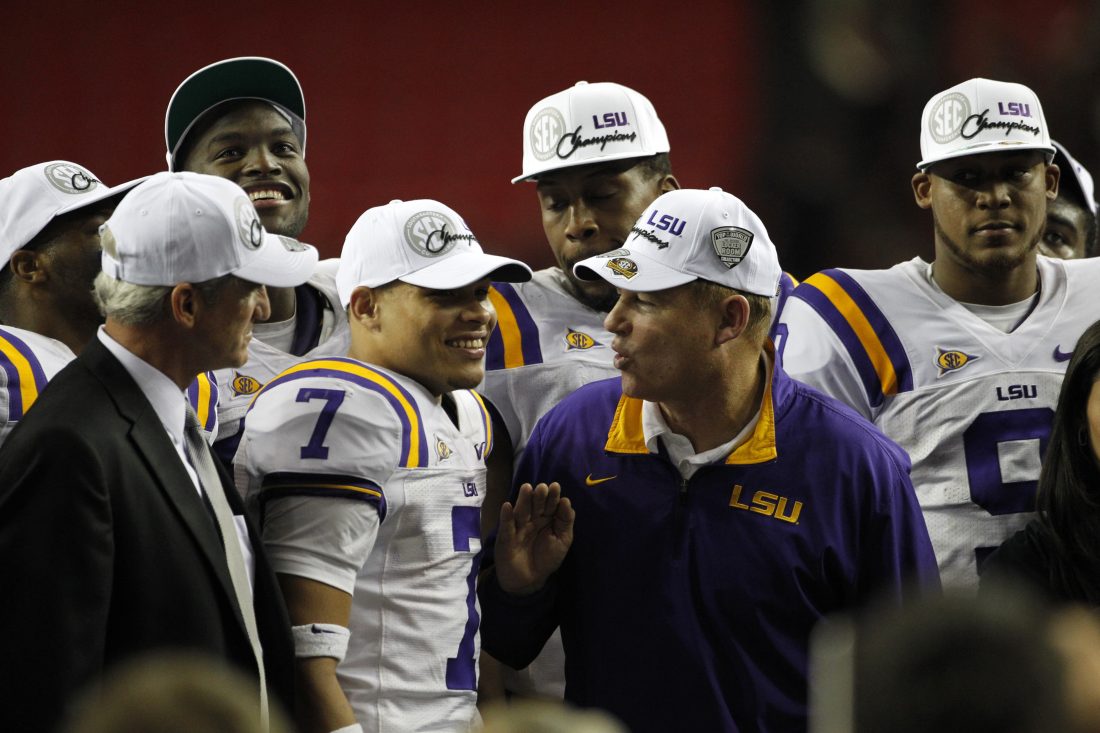 Since the conclusion of the KU football season in late November, Miles said has made a point to follow the Chiefs and Mathieu.

“On a Sunday that I’m not recruiting, I have time to watch pro football,” Miles said. “And I watch it a ton, and I watch the Chiefs first.”

Although Mathieu, Kansas City’s all-pro safety, is the only former pupil of Miles’ who will start for the Chiefs in Super Bowl LIV on Sunday, there are four other former players of his in Miami, involved in lesser roles.

Miles is excited to see so many of his former players make it to the Super Bowl.

“These guys are great teammates and great players and they’re going to handle the stage,” Miles predicted. “Good news is that they’ve played in big-time games before, and they’ll step to the field looking forward to playing.”

Mathieu only spent two seasons under Miles at LSU — the defensive back was dismissed ahead of his junior season, reportedly for multiple failed drug tests — but he played in the Cotton Bowl, an SEC Championship game and a BCS Championship game during his brief career with the Tigers.

It was well before those marquee games, though, that Miles said he and LSU’s coaches figured out Mathieu had next-level talent. That first became clear in preseason camp, ahead of Mathieu’s freshman year at LSU.

“I mean, his ball skills and anticipation,” Miles said of what made Mathieu an obvious talent. “And we knew, probably before most of the rest of the world did, that this (5-foot-9) guy’s going to play a lot of football,” Miles added, stretching out the word lot for effect.

It was during Mathieu’s standout college career that he first gained national attention. Miles recalled seeing his career take off.

“When they started calling him Honey Badger?” Miles asked. “I want you to know something. I like Tyrann Mathieu a little bit more than Honey Badger. I would seldom say, ‘Hey, Honey Badger.’ It just wasn’t me.”

The coach, of course, had a greater appreciation for the types of plays Mathieu made on the field with what Miles described as “anticipatory vision,” which allowed the young defensive back to read an offensive formation, know where the play was headed and go snuff it out.

“If he ever was in a position to make a ball skill play, if he had a drop, I don’t remember it,” Miles said of Mathieu. “Knowing he had great skill didn’t take a rocket scientist, but you had to bet that this guy’s size was something he was going to be able to deal with. And he did.”

Although Miles is happy for Mathieu’s professional success, he said he doesn’t view that as something that he as a coach should take personal pride in.

“More than not, a great player is a quality person. And when you see people playing in the Super Bowl, it’s come with hard work, effort and energy, and it’s not something that they’re going to take lightly. And it’s going to be a lifetime dream,” Miles said. “I say it in the humblest sense, it’s not, you know, my guys. OK, it is about the experience that those guys have had individually that have led them to this game. How wonderful.”

Miles won’t be going down to Miami for the Super Bowl, as he’ll be busy in Lawrence with recruiting. But there’s no question he’ll watch the big game with a rooting interest.

“I, like the rest of much of America, am going to be rooting for the Chiefs and (Patrick) Mahomes,” Miles said.

And Mathieu, of course, whom the coach said he has gone out of his way to not bother of late, so as not to distract his former player in any way.

“So, when we get done with this season, I may see if I can force him to have a meal with me,” Miles said with a grin.