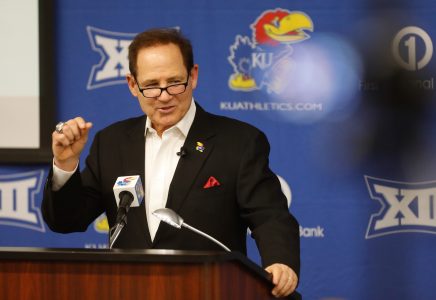 With most of their 2020 recruiting class sorted out in December, Kansas football head coach Les Miles and his assistants just have a few loose ends to tie up on Wednesday for National Signing Day.

The Jayhawks could add somewhere around four to six new additions to fill out the class, after announcing the signing of 19 high school seniors during the early signing period.

While previously known commitments such as defensive lineman Kenean Caldwell and offensive linemen Jackson Satterwhite and Bryce Cabeldue are expected to make their pledges official, there’s one local recruit who won’t be joining them.

Topeka High quarterback Da’Vonshai Harden Jr. told the Journal-World he won’t be signing on Wednesday. Harden did not want to share further details on the matter. Harden is rated as a two-star dual-threat quarterback by Rivals. He committed to KU back in March of 2019.

Meanwhile the Jayhawks appear to be in good standing with Ra’Mello Dotson, a two-star cornerback from Daytona Beach, Fla.

Dotson visited KU this past weekend and told Jon Kirby of Jayhawk Slant that defensive backs coach Chevis Jackson shared a lot of information with him.

“He was telling me stories about his past and what he did in college and the NFL,” Dotson told Jayhawk Slant. “And he was showing me how their defense works and things like that. He likes how long I am, and how I can go get the ball.”

One of KU’s final spots in the 2020 class might end up going to a defensive lineman.

The Jayhawks could also be in the mix for another D-lineman previously tied to the Red Raiders. Clinton Anokwuru, who decommitted form Tech back in October, visited KU this past week. Anokwuru followed that visit up with a trip to Washington State.

KU has yet to announce the signing of two-star receiver Kyler Pearson. But that should come once he has officially been accepted through KU’s student application process and cleared by the NCAA to participate, Pearson told the Journal-World.